Let the collections at Cup Noodle Museum Osaka Ikeda and Osaka Museum of History capture your imagination. Get a sense of the local culture at Nara Park and Osaka Castle. Take a break from Osaka with a short trip to Todai-ji Temple in Nara, about 1h 5 min away. There's much more to do: take a stroll through Dotombori District, ponder the world of politics at Mint Museum, examine the collection at Osaka Museum of Housing and Living, and explore the engaging exhibits at Kids Plaza Osaka.

To find maps, other places to visit, ratings, and more tourist information, go to the Osaka online trip builder.

Sydney, Australia to Osaka is an approximately 13-hour flight. Due to the time zone difference, you'll gain 1 hour traveling from Sydney to Osaka. In December, Osaka is cooler than Sydney - with highs of 13°C and lows of 4°C. Cap off your sightseeing on the 13th (Thu) early enough to travel to Hiroshima.
more less

Kick off your visit on the 13th (Thu): explore the activities along Motoyasu River, contemplate in the serene atmosphere at Senjokaku, then head outdoors with Mikasahama Beach, and finally stop by Miyajima Omotesando Shopping Street. Here are some ideas for day two: enjoy the sand and surf at Bay Side Beach Saka and then take an in-depth tour of Hiroshima Peace Memorial Museum.

For where to stay, reviews, other places to visit, and other tourist information, refer to the Hiroshima trip app.

Getting from Osaka to Hiroshima by train takes about 2 hours. Other options: drive; or do a combination of flight and train. In December, daytime highs in Hiroshima are 13°C, while nighttime lows are 4°C. Finish up your sightseeing early on the 15th (Sat) so you can catch the train to Kyoto.
more less

Hatsukaichi, Bay Side Beach Saka
Highlights from your plan

Escape the urban bustle at Mt. Kurama and Kamogawa River. Appreciate the collections at Kyoto International Manga Museum and Kyoto National Museum. Go for a jaunt from Kyoto to Moriyama to see Lake Biwa Bridge about 44 minutes away. There's still lots to do: make a trip to Gion, admire the striking features of Kyoto Station Building, explore the activities along Lake Biwa, and take in the spiritual surroundings of Kinkaku-ji.

To see photos, other places to visit, maps, and more tourist information, refer to the Kyoto trip itinerary builder tool.

Take a train from Hiroshima to Kyoto in 2.5 hours. Alternatively, you can drive; or take a bus. In December, plan for daily highs up to 13°C, and evening lows to 4°C. Finish up your sightseeing early on the 18th (Tue) so you can go by car to Takayama.
more less

Kick off your visit on the 18th (Tue): admire the landmark architecture of Yoshijima Heritage House, examine the collection at Takayama Showa Museum, then wander the streets of Sanmachi Suji, then sample the tasty concoctions at Funasaka Shuzo Brewery, and finally stop by Hida Bussankan.

To see traveler tips, other places to visit, and more tourist information, go to the Takayama trip planning tool.

Traveling by car from Kyoto to Takayama takes 3.5 hours. Alternatively, you can take a train; or take a bus. When traveling from Kyoto in December, plan for a bit cooler days and about the same nights in Takayama: temperatures range from 9°C by day to 3°C at night. Finish your sightseeing early on the 18th (Tue) so you can drive to Kanazawa.
more less

On the 19th (Wed), examine the collection at D. T. Suzuki Museum, step into the grandiose world of Kanazawa Castle, take a stroll through Higashichaya Old Town, then contemplate the long history of Shima, and finally buy something for everyone on your list at Kanazawa Hyakubangai Shopping Center.

For reviews, where to stay, other places to visit, and other tourist information, use the Kanazawa itinerary maker site.

You can drive from Takayama to Kanazawa in 2 hours. Alternatively, you can take a bus; or take a train. December in Kanazawa sees daily highs of 11°C and lows of 3°C at night. Finish up your sightseeing early on the 20th (Thu) so you can catch the train to Nikko.
more less 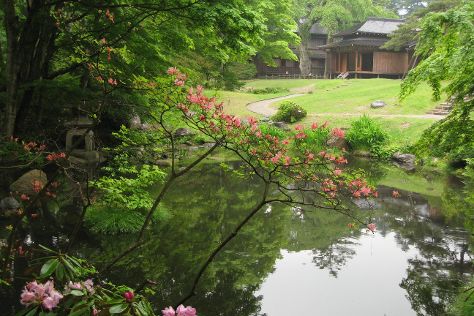 On the 20th (Thu), take in the pleasant sights at Nikko Tamozawa Imperial Villa Memorial Park and then look for gifts at Nikko Okaki Factory.

For reviews, where to stay, photos, and tourist information, you can read our Nikko route planner.

Getting from Kanazawa to Nikko by train takes about 4 hours. Other options: drive; or fly. Traveling from Kanazawa in December, you can expect nighttime temperatures to be a bit warmer in Nikko, with lows of 8°C. Wrap up your sightseeing on the 21st (Fri) to allow time to travel to Hachimantai.
more less

Parks · Shopping
Highlights from your plan

For photos, where to stay, maps, and other tourist information, read our Hachimantai travel planning site.

Traveling by car from Nikko to Hachimantai takes 5.5 hours. Alternatively, you can do a combination of car and flight. Traveling from Nikko in December, expect Hachimantai to be a bit cooler, temps between 4°C and -1°C. Wrap up your sightseeing by early afternoon on the 25th (Tue) to allow enough time to travel to Shirakawa.
more less

Things to do in Hachimantai

Shirakawa is a city located in Fukushima Prefecture, in northern Honshū, Japan. To find photos, more things to do, where to stay, and other tourist information, refer to the Shirakawa trip itinerary maker site.

Getting from Hachimantai to Shirakawa by car takes about 4.5 hours. Other options: do a combination of car and flight. December in Shirakawa sees daily highs of 7°C and lows of 0°C at night. You'll set off for Tokyo on the 26th (Wed).
more less

Things to do in Shirakawa

Get in touch with nature at Mt. Takao and Tokyo Dome City. Satisfy your inner culture vulture at Odaiba District and Asakusa. Go for a jaunt from Tokyo to Tachikawa to see Showa Kinen Park about 58 minutes away. Next up on the itinerary: stroll around Odaiba Kaihin Koen (Odaiba Seaside Park), don't miss a visit to Tokyo Metropolitan Government Buildings, browse the different shops at Diver City Tokyo Plaza, and take in nature's colorful creations at Shinjuku Gyoen National Garden.

To find reviews, where to stay, traveler tips, and more tourist information, go to the Tokyo trip planner.

Getting from Shirakawa to Tokyo by car takes about 3 hours. Plan for somewhat warmer temperatures traveling from Shirakawa in December, with highs in Tokyo at 14°C and lows at 4°C. Cap off your sightseeing on the 30th (Sun) early enough to travel back home.
more less