To find more things to do, reviews, where to stay, and tourist information, you can read our Fukuoka vacation planner.

Explore hidden gems such as JMSDF Kure Museum and Itsukushima Shrine Torii. Explore Hiroshima's surroundings by going to Hatsukaichi (Mikasahama Beach, Itsukushima Shrine, &more) and Momijidani Park (in Miyajima). And it doesn't end there: see where the action happens at MAZDA Zoom-Zoom Stadium Hiroshima, contemplate the long history of Atomic Bomb Dome, pause for some photo ops at Peace Bell, and make a trip to Peace Memorial Park - Hiroshima.

To find maps, photos, other places to visit, and tourist information, refer to the Hiroshima trip planner.

Getting from Fukuoka to Hiroshima by train takes about 2 hours. Other options: drive; or take a bus. Expect a daytime high around 36°C in August, and nighttime lows around 29°C. Cap off your sightseeing on the 26th (Mon) early enough to travel to Osaka.
more less

Start off your visit on the 26th (Mon): contemplate the long history of Sumiyoshi Taisha Shrine and then find something for the whole family at Universal Studios Japan. On the next day, step into the grandiose world of Osaka Castle, take in nature's colorful creations at Kobe Nunobiki Herb Gardens, and then soak in some Japanese tradition at Arima Onsen.

Take a train from Hiroshima to Osaka in 2 hours. Alternatively, you can drive; or do a combination of train and flight. In August in Osaka, expect temperatures between 39°C during the day and 29°C at night. Cap off your sightseeing on the 28th (Wed) early enough to catch the train to Kyoto.
more less

Kobe
Highlights from your plan

You'll discover tucked-away gems like Kennin-ji Temple and Walking tours. There's much more to do: take in the spiritual surroundings of Fushimi Inari-taisha Shrine, step into the grandiose world of Nijo Castle, steep yourself in history at Kiyomizu-dera Temple, and take a stroll through Pontocho District.

You can take a train from Osaka to Kyoto in 1.5 hours. Other options are to drive; or take a bus. In August, daytime highs in Kyoto are 39°C, while nighttime lows are 29°C. Finish your sightseeing early on the 31st (Sat) so you can travel to Tokyo.
more less

You'll explore the less-touristy side of things at Yokohama Intl Passenger Terminal and Tokyo Metropolitan Government Buildings. Go for a jaunt from Tokyo to Yokohama to see Sankeien Gardens about 48 minutes away. There's still lots to do: take in panoramic vistas at Tokyo International Airport (Haneda) Terminal No2 Observation Deck, take in the spiritual surroundings of Senso-ji Temple, take in nature's colorful creations at Shinjuku Gyoen National Garden, and wander the streets of Odaiba District.

To find other places to visit, more things to do, traveler tips, and tourist information, read our Tokyo sightseeing tool.

Traveling by train from Kyoto to Tokyo takes 3.5 hours. Alternatively, you can fly; or drive. In August in Tokyo, expect temperatures between 36°C during the day and 28°C at night. Finish your sightseeing early on the 3rd (Tue) so you can travel to Singapore.
more less

Yokohama
Highlights from your plan 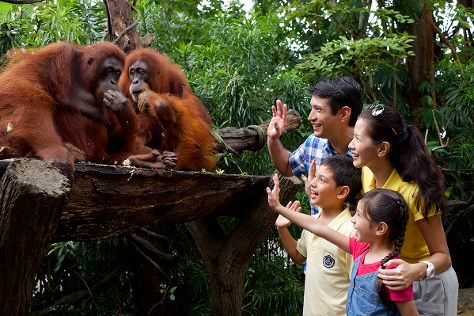 A Singapore vacation reveals the many charms of a leading city-state and regional hub of culture, retail, and tourism.

Step off the beaten path and head to Battlebox and MacRitchie Nature Trail. Pack the 8th (Sun) with family-friendly diversions at Universal Studios Singapore. There's lots more to do: meet the residents at Singapore Zoo, enjoy breathtaking views from Singapore Flyer, contemplate the waterfront views at Singapore River, and appreciate the extensive heritage of The Helix Bridge.

You can fly from Tokyo to Singapore in 11 hours. Alternatively, you can do a combination of car and ferry. The time zone changes from Japan Standard Time to Singapore Standard Time, which is usually a -1 hour difference. Traveling from Tokyo in September, things will get somewhat warmer in Singapore: highs are around 38°C and lows about 30°C. Finish up your sightseeing early on the 9th (Mon) so you can travel back home.
more less

Things to do in Singapore

Sentosa Island
Highlights from your plan