Kick off your visit on the 2nd (Wed): appreciate the history behind Hermes by Praxiteles and then relax in the rural setting at Klio's Honey Farm. On your second day here, learn about winemaking at Olympia Land Winery, contemplate in the serene atmosphere at Archaeological Site of Olympia, then take in the local highlights with Walking tours, and finally examine the collection at Archimedes Museum.

To see photos, traveler tips, more things to do, and tourist information, use the Olympia day trip site.

Auckland, New Zealand to Olympia is an approximately 30-hour combination of flight and bus. You can also do a combination of flight, ferry, and bus; or do a combination of bus and flight. The time zone difference moving from New Zealand Standard Time (NZST) to Eastern European Time (EET) is minus 10 hours. While traveling from Auckland, expect warmer days and somewhat warmer nights in Olympia, ranging from highs of 33°C to lows of 20°C. Wrap up your sightseeing on the 3rd (Thu) to allow time to drive to Nafplio.
more less

Nafplio, a city famed for its narrow lanes and elegant architecture, provides a comfortable base for exploring the many surrounding ancient sites.

Get out of town with these interesting Nafplio side-trips: Corinth (Akrokorinthos, Archea Korinthos, &more), Arkadiko Bridge (in Mycenae) and The Great Theatre of Epidaurus (in Epidavros). And it doesn't end there: explore the ancient world of Archaeological Site Mycenae, step into the grandiose world of Fortress Palamidi, take in the waterfront at Nauplion Promenade, and take an in-depth tour of Peloponnesian Folklore Foundation.

Traveling by car from Olympia to Nafplio takes 2.5 hours. Alternatively, you can take a bus; or take a bus. Traveling from Olympia in September, plan for a bit cooler nights in Nafplio, with lows around 14°C. Finish your sightseeing early on the 6th (Sun) so you can drive to Athens.
more less

Things to do in Nafplio

Corinth, Mycenae, The Great Theatre of Epidaurus
Highlights from your plan

©
The Great Theatre of Epidaurus

Athens is known for historic sites, museums, and nightlife. Your plan includes some of its best attractions: steep yourself in history at Acropolis of Athens, delve into the distant past at Ancient Agora of Athens, get engrossed in the history at Acropolis Museum, and take your sightseeing to a higher altitude at Mount Lycabettus.

Use Inspirock's suggestions to plan your Athens trip and find the best activities and attractions for your vacation.

You can drive from Nafplio to Athens in 2 hours. Alternatively, you can take a bus. Traveling from Nafplio in September, you can expect nighttime temperatures to be somewhat warmer in Athens, with lows of 24°C. Wrap up your sightseeing on the 9th (Wed) early enough to travel to Corfu Town.
more less

Venture out of the city with trips to Speed Boats Tours (in Kavos) and Marathias Beach (in Marathias). Next up on the itinerary: browse the exhibits of Corfu Museum of Asian Art, look for gifts at Zea Delicatessen, appreciate the history behind Schulenburg Statue, and don't miss a visit to Spianada Square.

For traveler tips, reviews, ratings, and other tourist information, you can read our Corfu Town online tour itinerary planner.

You can do a combination of subway and flight from Athens to Corfu Town in 3 hours. Other options are to do a combination of car and ferry; or take a bus. In September, plan for daily highs up to 32°C, and evening lows to 21°C. Finish up your sightseeing early on the 12th (Sat) so you can catch the flight to Mykonos Town.
more less 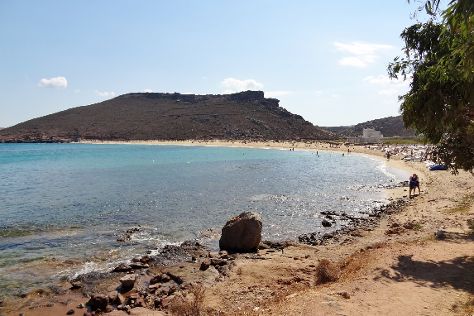 Mykonos Town is known for nightlife, beaches, and historic sites. Your plan includes some of its best attractions: wander the streets of Little Venice, take in the spiritual surroundings of Paraportiani Church, enjoy the sand and surf at Paradise Beach, and take a tour by water with Boat Tours & Water Sports.

For ratings, reviews, other places to visit, and other tourist information, use the Mykonos Town trip itinerary planning tool.

Step out of Fira with an excursion to La Ponta in Akrotiri--about 30 minutes away. Next up on the itinerary: delve into the distant past at Akrotiri, enjoy the sand and surf at Red Beach, explore by horseback at Santo Horse Riding, and steep yourself in history at Ancient Thera.

Ride a ferry from Mykonos Town to Fira in 2 hours. Alternatively, you can fly. In September, plan for daily highs up to 32°C, and evening lows to 24°C. Finish your sightseeing early on the 18th (Fri) so you can ride a ferry to Heraklion.
more less

Crete's largest city, Heraklion remains best known for its proximity to a sprawling Bronze Age archaeological site, once the center of a vanished Minoan civilization.

Kick off your visit on the 19th (Sat): get engrossed in the history at Heraklion Archaeological Museum, then delve into the distant past at The Palace of Knossos, and then do a tasting at Winery Stilianou. On your second day here, learn more about the world around you at The Natural History Museum of Crete, take an in-depth tour of Ιστορικό Μουσείο Κρήτης - Historical Museum of Crete, then pause for some serene contemplation at Church of Saint Titus, and finally observe the fascinating underwater world at Cretaquarium - Thalassocosmos.

For more things to do, where to stay, traveler tips, and other tourist information, read our Heraklion trip maker site.

You can ride a ferry from Fira to Heraklion in 2 hours. In September in Heraklion, expect temperatures between 32°C during the day and 24°C at night. Cap off your sightseeing on the 20th (Sun) early enough to travel back home.
more less

Things to do in Heraklion

The Palace of Knossos, Cretaquarium - Thalassocosmos, Winery Stilianou
Highlights from your plan

©
The Palace of Knossos