©
Civita Castellana is a town and comune in the province of Viterbo, 65km north of Rome.Mount Soracte lies about 10km to the south-east.HistoryCivita Castellana was settled during the Iron Age by the Italic people of the Falisci, who called it Falerii. Explore Civita Castellana's surroundings by going to Fontana Barocca (in Vignanello), La Bottega degli Orsini (in Mugnano in Teverina) and Parco dei Mostri (in Bomarzo). There's much more to do: admire the landmark architecture of Villa Farnese, contemplate in the serene atmosphere at Chiesa della Madonna delle Piagge, contemplate the long history of Eremo di San Girolamo, and appreciate the extensive heritage of Via Amerina.

Fort Myers, USA to Civita Castellana is an approximately 19-hour combination of flight and car. The time zone changes from Eastern Standard Time (EST) to Central European Time (CET), which is usually a 6 hour difference. When traveling from Fort Myers in March, plan for colder days and a bit cooler nights in Civita Castellana: temperatures range from 58°F by day to 41°F at night. Finish your sightseeing early on the 20th (Fri) to allow enough time to travel to Civita di Bagnoregio.
more less

Things to do in Civita Castellana 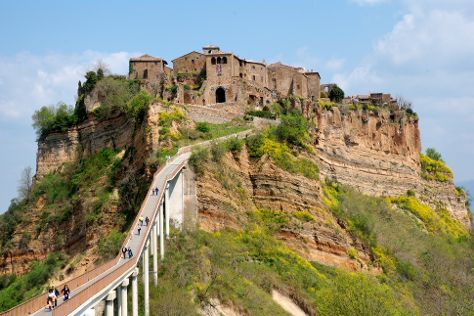 To see traveler tips, more things to do, where to stay, and more tourist information, use the Civita di Bagnoregio trip itinerary planner.

Things to do in Civita di Bagnoregio

©
Tarquinia, formerly Corneto, is an old city in the province of Viterbo, Lazio, Italy known chiefly for its outstanding and unique ancient Etruscan tombs in the widespread necropoli or cemeteries which it overlies, for which it was awarded UNESCO World Heritage status.In 1922 it was renamed after the ancient city of Tarquinii (Roman) or Tarch(u)na (Etruscan). Get out of town with these interesting Tarquinia side-trips: Romitori di Ischia di Castro (in Ischia di Castro), Chiesa di Sant'Egidio (in Cellere) and Barbarano Romano (Parco Regionale Marturanum & Rocky Necropolis of Saint Giuliano). Next up on the itinerary: take an in-depth tour of Museo Nazionale Tarquiniense, learn about winemaking at Etruscaia, contemplate in the serene atmosphere at Chiesa e Convento di San Francesco, and enjoy breathtaking views from Porta di Castello e Torrione detto di Matilde di Canossa.

For reviews, other places to visit, and more tourist information, read our Tarquinia holiday planner.

You can drive from Civita di Bagnoregio to Tarquinia in 1.5 hours. Alternatively, you can take a bus. In March, daily temperatures in Tarquinia can reach 58°F, while at night they dip to 41°F. You will have some time to spend on the 1st (Wed) before leaving for home.
more less

Things to do in Tarquinia