On the 21st (Tue), see the interesting displays at Museo Nacional Thyssen-Bornemisza, steep yourself in history at Plaza Mayor, and then explore the world behind art at Prado National Museum. Get ready for a full day of sightseeing on the 22nd (Wed): fly down the slopes at Puerto de Navacerrada – Estacion de Esqui, make a trip to Puerta del Sol, and then make a trip to Plaza de Oriente.

Buenos Aires, Argentina to Madrid is an approximately 16.5-hour flight. You can also do a combination of ferry and flight. Traveling from Buenos Aires to Madrid, you'll lose 4 hours due to the time zone difference. In January, Madrid is cooler than Buenos Aires - with highs of 12°C and lows of 2°C. Wrap up your sightseeing by early afternoon on the 23rd (Thu) to allow enough time to travel to Chamonix.
more less

Start off your visit on the 24th (Fri): take a memorable tour with Tours, tour the pleasant surroundings at Vallee Blanche, then stroll through Aiguille du Midi, and finally explore the different monuments and memorials at Chamonix Cemetery. Get ready for a full day of sightseeing on the next day: relax and rejuvenate at some of the best spas, take in the awesome beauty at Brevent Cable Car, then hit the slopes at Sport 2000 Cham'Sport Aiguille du Midi, and finally take some stellar pictures from Aiguille des Grands Montets.

Kick off your visit on the 26th (Sun): get great views at Cathedrale de St-Pierre and then contemplate the waterfront views at Lake Geneva. Keep things going the next day: take in the spiritual surroundings of Cathedrale de Lausanne, get a sense of history and politics at Palais des Nations, Genève, then admire the local landmark of The Geneva Water Fountain, and finally test your problem-solving skills at popular escape rooms.

Traveling by car from Chamonix to Geneva takes 1.5 hours. Alternatively, you can take a bus; or take a train. In January, daily temperatures in Geneva can reach 6°C, while at night they dip to 0°C. Wrap up your sightseeing on the 27th (Mon) early enough to take a train to Zermatt.
more less

Kick off your visit on the 24th (Fri): fly down the slopes at Matterhorn Ski Paradise, take a memorable drive along Gornergrat, and then take in panoramic vistas at Sunnegga. Keep things going the next day: take in the architecture and atmosphere at Parish Church of St. Mauritius, take in the awesome beauty at The Matterhorn, then make a trip to Walk of Climb, then stroll the grounds of Mountaineers' Cemetery, and finally see the interesting displays at Matterhorn Museum - Zermatlantis.

To see reviews, maps, where to stay, and more tourist information, read our Zermatt planning app .

Traveling by train from Geneva to Zermatt takes 4 hours. Cap off your sightseeing on the 25th (Sat) early enough to catch the train to St. Moritz.
more less 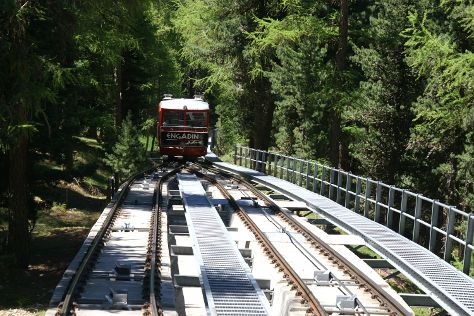 On the 30th (Thu), take in the awesome beauty at Muottas Muragl, contemplate the waterfront views at Lake St. Moritz, and then take some stellar pictures from Diavolezza. Get ready for a full day of sightseeing on the next day: take your sightseeing to a higher altitude at Piz Corvatsch, steep yourself in history at The Leaning Tower, Engadin St. Moritz, then take in the awesome beauty at Piz Nair, and finally make a trip to Chesa Futura.

For other places to visit, maps, photos, and other tourist information, read our St. Moritz trip itinerary maker site .

Traveling by train from Zermatt to St. Moritz takes 8.5 hours. Expect a daytime high around 1°C in January, and nighttime lows around -7°C. Wrap up your sightseeing on the 31st (Fri) to allow time to drive to Arosa.
more less 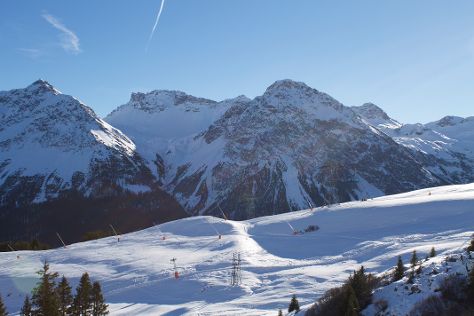 ©
Arosa is a statistic town and a municipality in the Plessur Region in the canton of Graubünden in Switzerland. On the 1st (Sat), fly down the slopes at Parsenn Skigebiet and then fly down the slopes at Arosa Ski Resort. Keep things going the next day: take in the spiritual surroundings of St. Leonhard Kapelle, stop by Old Town Chur, look for all kinds of wild species at Arosa Barenland, then contemplate the long history of Bergkirchli, then savor the flavors at Sennerei Maran, and finally hike along Eichhornchenweg.

For traveler tips, topicsMoreInfo.option.ratings, other places to visit, and other tourist information, use the Arosa day trip planning app .

You can drive from St. Moritz to Arosa in 2.5 hours. Alternatively, you can take a train; or take a bus. Expect a daytime high around 1°C in January, and nighttime lows around -7°C. Finish your sightseeing early on the 2nd (Sun) to allow enough time to drive to Lucerne.
more less

Things to do in Arosa

Kick off your visit on the 3rd (Mon): snap pictures at Chapel Bridge, then admire the landmark architecture of Lucerne Station, then take in the awesome beauty at Mt Pilatus, and finally explore the activities along Lake Lucerne. On the next day, pause for some photo ops at Lion Monument and then hit the slopes at Titlis.

To find other places to visit, topicsMoreInfo.option.ratings, reviews, and tourist information, you can read our Lucerne online vacation planner .

You can drive from Arosa to Lucerne in 2.5 hours. Another option is to take a train. Expect a bit warmer temperatures when traveling from Arosa in February; daily highs in Lucerne reach 7°C and lows reach -1°C. Finish your sightseeing early on the 4th (Tue) to allow enough time to drive to Zurich.
more less

Titlis
Highlights from your plan

On the 5th (Wed), contemplate the waterfront views at Lake Zurich, then contemplate in the serene atmosphere at Fraumünster Church, and then appreciate the extensive heritage of Old Town. Here are some ideas for day two: explore the world behind art at Museum of Art (Kunsthaus Zurich) and then take a stroll through Bahnhofstrasse.

To see where to stay, topicsMoreInfo.option.ratings, more things to do, and more tourist information, read Zurich travel route website .

You can drive from Lucerne to Zurich in an hour. Alternatively, you can take a train. In February, daytime highs in Zurich are 7°C, while nighttime lows are -1°C. Finish your sightseeing early on the 6th (Thu) to allow enough time to travel to Vienna.
more less

Start off your visit on the 7th (Fri): make a trip to Stephansplatz, take in the architecture and atmosphere at Peterskirche, see the interesting displays at The Hofburg, then admire the masterpieces at Kunsthistorisches Museum Wien, and finally take in the architecture and atmosphere at St. Stephen's Cathedral. On the 8th (Sat), you'll have a packed day of sightseeing: learn about wildlife with up-close encounters at Schönbrunn Zoo, then step into the grandiose world of Schonbrunn Palace, and then explore the world behind art at Albertina.

To see topicsMoreInfo.option.ratings, other places to visit, maps, and tourist information, refer to the Vienna travel itinerary planner.

Getting from Zurich to Vienna by flight takes about 4.5 hours. Other options: do a combination of train and flight; or drive. In February in Vienna, expect temperatures between 5°C during the day and -1°C at night. Wrap up your sightseeing on the 8th (Sat) to allow time to travel back home.
more less