On the 2nd (Thu), see the interesting displays at Kunsthistorisches Museum Wien, browse the eclectic array of goods at Vienna Naschmarkt, then explore the galleries of Belvedere Palace, then wander the streets of Graben and Kohlmarkt, and finally pause for some serene contemplation at St. Stephen's Cathedral. On the 3rd (Fri), you'll have a packed day of sightseeing: admire the landmark architecture of Schonbrunn Palace, take in the spiritual surroundings of Augustinerkirche, then examine the collection at The Hofburg, and finally wander the streets of Historic Center of Vienna.

To find other places to visit, more things to do, photos, and more tourist information, refer to the Vienna trip itinerary maker app. 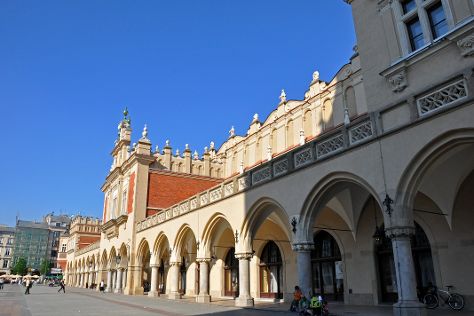 Kick off your visit on the 4th (Sat): make a trip to Krakow's Rynek Glowny Central Square, browse the eclectic array of goods at Sukiennice (Cloth Hall), contemplate in the serene atmosphere at Wawel Cathedral, then admire the striking features of St. Mary's Basilica, then appreciate the history behind Church of St. Peter and St. Paul, and finally wander the streets of Kazmierz The Former Jewish District.

To see where to stay, other places to visit, more things to do, and other tourist information, use the Krakow trip planner.

Traveling by flight from Vienna to Krakow takes 4.5 hours. Alternatively, you can drive; or take a shuttle. In September, plan for daily highs up to 66°F, and evening lows to 49°F. Finish your sightseeing early on the 4th (Sat) so you can travel to Prague.
more less

On the 5th (Sun), make a trip to Staromestske namesti, then stop by Moser Sales Gallery, then get great views at Prague Astronomical Clock, and finally take in the spiritual surroundings of St. Vitus Cathedral.

For ratings, maps, reviews, and tourist information, refer to the Prague trip planner.

You can fly from Krakow to Prague in 4.5 hours. Other options are to drive; or take a shuttle. In September, daily temperatures in Prague can reach 66°F, while at night they dip to 51°F. Wrap up your sightseeing on the 5th (Sun) early enough to drive to Berlin.
more less 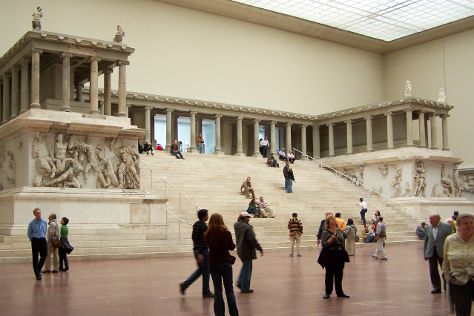 Start off your visit on the 6th (Mon): examine the collection at Topography of Terror and then admire the masterpieces at Pergamonmuseum.

Plan a trip to Berlin easily and quickly by telling Inspirock to suggest an itinerary.

Traveling by car from Prague to Berlin takes 3.5 hours. Alternatively, you can take a shuttle; or take a bus. Wrap up your sightseeing by early afternoon on the 6th (Mon) to allow time for travel to Amsterdam.
more less

Get some cultural insight at Anne Frank House and Rijksmuseum. Appreciate the collections at The Mauritshuis Royal Picture Gallery and Frans Hals Museum. Explore Amsterdam's surroundings by going to Scheveningen Beach (in Scheveningen) and Old Church (in Delft). There's still lots to do: explore the world behind art at Van Gogh Museum, browse the exhibits of Museum Het Rembrandthuis (Rembrandt House), wander the streets of Red Light District, and indulge your thirst for a good beer at Heineken Experience.

Traveling by flight from Berlin to Amsterdam takes 4.5 hours. Alternatively, you can drive; or take a train. In September, daytime highs in Amsterdam are 67°F, while nighttime lows are 52°F. Wrap up your sightseeing on the 9th (Thu) early enough to drive to Brussels.
more less

Start off your visit on the 10th (Fri): make a trip to Les Galeries Royales Saint-Hubert, don't miss a visit to Place St. Gery, then contemplate the long history of Grand Place, then sample the tasty concoctions at Cantillon Brewery, and finally make a trip to Atomium.

To see reviews, more things to do, where to stay, and tourist information, you can read our Brussels journey tool.

Getting from Amsterdam to Brussels by car takes about 2.5 hours. Other options: take a train; or fly. In September, plan for daily highs up to 65°F, and evening lows to 50°F. Finish your sightseeing early on the 11th (Sat) so you can take a train to Paris.
more less

Start off your visit on the 11th (Sat): steep yourself in history at Eiffel Tower, then explore the world behind art at Musee d'Orsay, and then explore the world behind art at Louvre Museum. Keep things going the next day: examine the collection at Musee Rodin, admire the landmark architecture of Arc de Triomphe, shop like a local with Champs-Elysees, then pause for some serene contemplation at Basilique du Sacre-Coeur de Montmartre, and finally take a stroll through Montmartre.

To find where to stay, photos, ratings, and tourist information, you can read our Paris trip itinerary planner.

Traveling by train from Brussels to Paris takes 2.5 hours. Alternatively, you can drive; or fly. In September, plan for daily highs up to 70°F, and evening lows to 53°F. Wrap up your sightseeing by early afternoon on the 13th (Mon) to allow time for travel to Barcelona.
more less

On the 14th (Tue), wander the streets of Las Ramblas, then kick back and relax at Playa de La Barceloneta, then admire the masterpieces at Museu Picasso, and finally contemplate the long history of Basilica de Santa Maria del Mar. Get ready for a full day of sightseeing on the 15th (Wed): get a taste of the local shopping with La Boqueria, stop by El Barri Gòtic, make a trip to Casa Batllo, then admire the striking features of Basilica of the Sagrada Familia, and finally stroll around Parc Guell.

Ask Inspirock to suggest an itinerary and make planning a trip to Barcelona fast, fun, and easy.

You can fly from Paris to Barcelona in 5.5 hours. Alternatively, you can take a train; or drive. Traveling from Paris in September, things will get somewhat warmer in Barcelona: highs are around 79°F and lows about 65°F. Finish your sightseeing early on the 16th (Thu) so you can travel to Rome.
more less

Give yourself a bit of retail therapy at Via Condotti and Trevimage. Take a break from the city and head to Catacombs of Saint Callixtus and Colle del Gianicolo. Step out of Rome with an excursion to Culture Discovery Vacations - Cooking Classes & Vacations in Soriano nel Cimino--about 1h 20 min away. There's lots more to do: admire the landmark architecture of Pantheon, get engrossed in the history at Musei Capitolini, admire the masterpieces at Galleria Borghese, and steep yourself in history at Colosseum.

For where to stay, ratings, traveler tips, and other tourist information, read our Rome itinerary planner.

Fly from Barcelona to Rome in 5.5 hours. Alternatively, you can drive; or take a train. Plan for slightly colder nights when traveling from Barcelona in September since evenings lows in Rome dip to 60°F. Wrap up your sightseeing on the 20th (Mon) to allow time to travel back home.
more less