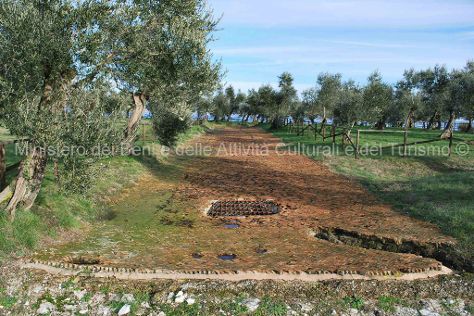 ©
Castelnuovo del Garda is an Italian comune (municipality), in the Province of Verona, in Veneto, on a couple of morainic hills few kilometers south-east from Garda lake. Kick off your visit on the 11th (Fri): make a trip to Parrocchia Santa Maria Della Neve, delve into the distant past at Grotte di Catullo, then get to know the fascinating history of Centro Storico Sirmione, and finally meet the residents at Gardaland SEA LIFE Aquarium. On the 12th (Sat), you'll have a packed day of sightseeing: take in the architecture and atmosphere at Chiesetta di S. Anna, then step into the grandiose world of Castello Scaligero, and then get in on the family fun at Gardaland Park.

For more things to do and tourist information, refer to the Castelnuovo del Garda vacation website.

If you are flying in from United States, the closest major aiports are Verona Villafranca Airport, Il Caravaggio International Airport and Bologna Guglielmo Marconi Airport. In October, daily temperatures in Castelnuovo del Garda can reach 66°F, while at night they dip to 51°F. Finish your sightseeing early on the 12th (Sat) to allow enough time to travel back home.
more less

Things to do in Castelnuovo del Garda

Sirmione
Highlights from your plan