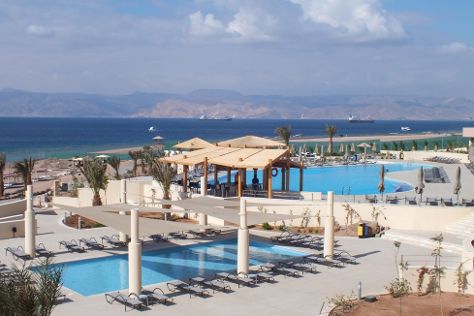 Bride of the Red Sea

Jordan's only coastal and port city, Aqaba offers a wide range of water-related activities offshore to accompany its mix of historic buildings back on land.

B12 Beach Club at Ayla Oasis has been added to your itinerary. On the 20th (Thu), hit the best photo ops around with an inspiring photography tour, head outdoors with B12 Beach Club at Ayla Oasis, and then take in the exciting artwork at Arts of Sham Countries Art Gallery. Get ready for a full day of sightseeing on the 21st (Fri): head outdoors with Berenice Beach Club, then stroll through South Beach, and then take some stellar pictures from Lawrence's House.

Plan my Aqaba trip by asking Inpirock to come up with tips and suggestions.

If you are flying in from France, the closest major aiport is Aqaba King Hussein International Airport. In August in Aqaba, expect temperatures between 47°C during the day and 33°C at night. Cap off your sightseeing on the 21st (Fri) early enough to travel back home.
more less

Things to do in Aqaba