©
Brig, officially Brig-Glis is a historic town and a municipality in the district of Brig in the canton of Valais in Switzerland.The current municipality was formed in 1972 through the merger of Brig, Brigerbad and Glis.Together with other Alpine towns Brig-Glis engages in the Alpine Town of the Year Association for the implementation of the Alpine Convention to achieve sustainable development in the Alpine Arc.Brig-Glis was awarded Alpine Town of the Year 2008.The official language of Brig is German, but the main spoken language is the local variant of the Alemannic Swiss German dialect.HistoryThe name Brig is derived from Briva, or "bridge." Its older houses are very Italian in appearance, while its most prominent buildings (Stockalper Palace, former Jesuits' college and Ursuline convent) all date from the 17th century, and are due to the generosity of a single member of the local Stockalper family, the baron Kaspar Stockalper.The prosperity of Brig is bound up with the Simplon Pass, so that it gradually supplanted the more ancient village of Naters opposite, becoming a separate parish (the church is at Glis, a few minutes from the town) in 1517. On the 6th (Mon), steep yourself in history at Landmauer Gamsen and then take in the awesome beauty at Jungfraujoch. Get ready for a full day of sightseeing on the next day: pause for some serene contemplation at Felsenkirche Eglise St.Michael, take in the awesome beauty at The Eiger, thenfly down the slopes at Luftseilbahnen Fiesch-Eggishorn AG, and finally explore the striking landscape at Aletsch Glacier.

Birmingham, UK to Brig is an approximately 10-hour combination of car and flight. You can also drive. The time zone difference when traveling from Birmingham to Brig is 1 hour. In July, daytime highs in Brig are °C, while nighttime lows are °C. Finish up your sightseeing early on the 7th (Tue) so you can travel to Annecy.
more less 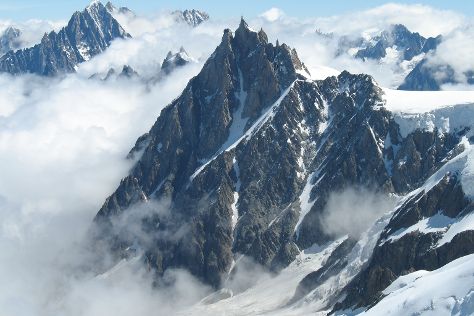 Step off the beaten path and head to Aiguille du Midi and Parasailing & Paragliding. Visiting Lake Annecy and Brevent Cable Car will get you outdoors. Explore the numerous day-trip ideas around Annecy: Plage de Doussard (in Doussard), Plage de Conjux (in Conjux) and Tunnel du Mont-Blanc (in Chamonix). And it doesn't end there: take in breathtaking views at Les Gorges du Fier, look for all kinds of wild species at Ile des Cygnes, get engrossed in the history at Maison de la Galerie, and kick back and relax at Excenevex Plage.

Before you visit Annecy, use our trip planner to discover what you can do and see there.

Traveling by car from Brig to Annecy takes 3 hours. In July, daily temperatures in Annecy can reach °C, while at night they dip to °C. Wrap up your sightseeing on the 11th (Sat) to allow time to take a train to Paris.
more less

Eiffel Tower and Orléans Cathedral will appeal to history buffs. Get in touch with nature at Ile Saint-Louis and Île de la Cité. There's much more to do: explore the world behind art at Musee d'Orsay, brush up on your military savvy at The Army Museum, pause for some serene contemplation at Chapelle Notre Dame de la Medaille Miraculeuse, and admire the striking features of Sainte-Chapelle.

To find more things to do, traveler tips, ratings, and tourist information, go to the Paris route maker site.

Getting from Annecy to Paris by train takes about 4.5 hours. Other options: drive; or do a combination of bus and flight. In July, daytime highs in Paris are °C, while nighttime lows are °C. Wrap up your sightseeing on the 15th (Wed) early enough to take a train to Brussels.
more less

Orléans Cathedral
Highlights from your plan

Visit Grand Place and Chateau de Bouillon for their historical value. Do some cultural sightseeing at Tyne Cot Cemetery and St. Michael and St. Gudula Cathedral (Cathedrale St-Michel et Ste-Gudule). Get out of town with these interesting Brussels side-trips: Atlantikwall Raversyde (in Ostend), Bastogne War Museum (in Bastogne) and Ghent (Saint Bavo's Cathedral & Gravensteen). And it doesn't end there: contemplate the long history of Citadelle (Citadel), pause for some serene contemplation at Eglise Saint-Etienne de Waha, explore the fascinating underground world of Domaine Des Grottes De Han, and take in the spiritual surroundings of Eglise Notre Dame Du Sablon.

For other places to visit, ratings, traveler tips, and other tourist information, read Brussels attractions planner.

You can take a train from Paris to Brussels in 2.5 hours. Alternatively, you can drive; or fly. When traveling from Paris in July, plan for little chillier days in Brussels, with highs around °C, while nights are about the same with lows around °C. Finish up your sightseeing early on the 19th (Sun) so you can go by car to Amsterdam.
more less

Do some cultural sightseeing at Van Gogh Museum and The Jordaan. Your inner history buff will appreciate Anne Frank House and Canals area. Venture out of the city with trips to Panorama Mesdag (in The Hague), Strand Bloemendaal Aan Zee (in Bloemendaal) and World Heritage Kinderdijk (in Kinderdijk). Next up on the itinerary: admire the masterpieces at Rijksmuseum, steep yourself in history at Portuguese Synagogue, browse the exhibits of Museum Het Rembrandthuis (Rembrandt House), and see the interesting displays at Zaanse Schans.

Drive from Brussels to Amsterdam in 2.5 hours. Alternatively, you can take a train; or fly. In July in Amsterdam, expect temperatures between °C during the day and °C at night. Finish up your sightseeing early on the 23rd (Thu) so you can travel back home.
more less