You'll explore the less-touristy side of things at Little Hagia Sophia and Rahmi M. Koc Museum. Popular historic sites such as Hagia Sophia Museum and Basilica Cistern are in your itinerary. The adventure continues: take in the spiritual surroundings of Sultan Ahmed Mosque, admire the masterpieces at Chora Museum, contemplate the waterfront views at Halic, and take an in-depth tour of Turkish and Islamic Arts Museum (Turk ve Islam Eserleri Muzesi).

To find where to stay, photos, maps, and more tourist information, read our Istanbul visit planner.

Melbourne, Australia to Istanbul is an approximately 23-hour flight. The time zone difference moving from Australian Eastern Standard Time to Turkey Time is minus 7 hours. Traveling from Melbourne in August, things will get much hotter in Istanbul: highs are around 34°C and lows about 25°C. Wrap up your sightseeing on the 31st (Tue) early enough to travel to Uchisar.
more less 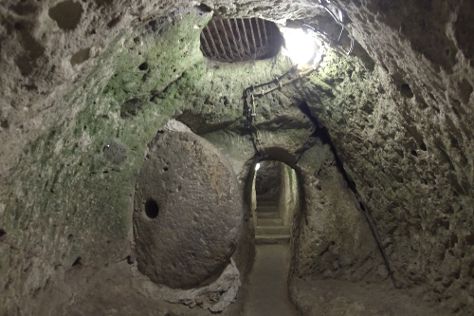 Enjoy the best views of Capaddocia at Uchisar, home to a rock citadel at the area's highest point.

Take a break from the city and head to Uchisar Castle and Balloon Rides. Your cultural itinerary includes sights like Derinkuyu Yeralti Sehri and Hacibektas. Explore the numerous day-trip ideas around Uchisar: Guzelyurt (Guzelyurt Valley Monastery & Kilise Camii), Cilehane (in Hacibektas) and Hacıbektaş Veli Müzesi (in Nevsehir). There's much more to do: appreciate the extensive heritage of Gore Harabeleri, do a tasting at Kocabag Winery, admire the verdant scenery at Devrent Valley, and stop by Kapadokya Onyx Stone Center.

To see photos, traveler tips, other places to visit, and more tourist information, you can read our Uchisar travel route planner.

You can fly from Istanbul to Uchisar in 4.5 hours. Alternatively, you can drive; or do a combination of train and bus. Expect somewhat warmer weather when traveling from Istanbul in August: highs in Uchisar hover around 38°C, while lows dip to 19°C. Wrap up your sightseeing on the 3rd (Fri) early enough to travel to Antalya.
more less

Things to do in Uchisar 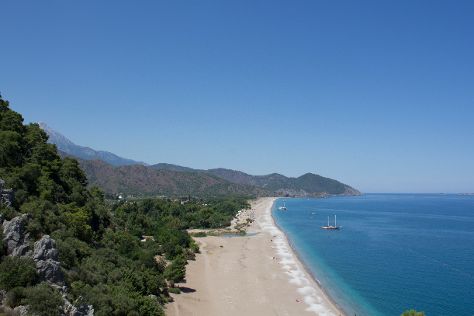 Your itinerary includes some good beach time at Cirali Beach and Lara Beach. Take a break from the city and head to TahtalI Dagi and Canyoning & Rappelling Tours. You'll find plenty of places to visit near Antalya: Side (Vespasianus Aniti, Monumental Fountain (Nymphaeum), &more), Beldibi Yeni Merkez Cami (in Beldibi) and Olympos Ruins (in Olympos). The adventure continues: explore the ancient world of Seleukia (Lybre), take in the dramatic scenery at Lower Duden Waterfalls, and contemplate in the serene atmosphere at Yivli Minaret Mosque.

Traveling by flight from Uchisar to Antalya takes 6.5 hours. Alternatively, you can drive; or take a bus. Traveling from Uchisar in September, you can expect nighttime temperatures to be a bit warmer in Antalya, with lows of 24°C. Finish your sightseeing early on the 6th (Mon) so you can drive to Fethiye.
more less

Getting from Antalya to Fethiye by car takes about 3 hours. Other options: take a bus. Plan for a bit cooler nights when traveling from Antalya in September since evenings lows in Fethiye dip to 20°C. Cap off your sightseeing on the 9th (Thu) early enough to go by car to Pamukkale.
more less 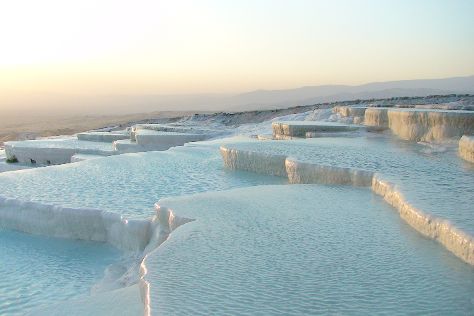 Start off your visit on the 9th (Thu): witness a stunning natural landmark at Pamukkale Thermal Pools, delve into the distant past at Hierapolis, then admire the sheer force of Ornaz Vadisi, and finally take in the natural beauty of kirmizi su.

You can drive from Fethiye to Pamukkale in 3.5 hours. Alternatively, you can do a combination of bus and taxi. Finish up your sightseeing early on the 10th (Fri) so you can go by car to Kusadasi.
more less

Denizli
Highlights from your plan

You can drive from Pamukkale to Kusadasi in 3 hours. Another option is to take a bus. The time zone difference moving from Turkey Time (TRT) to Eastern European Standard Time (EET) is minus 1 hour. In September, daily temperatures in Kusadasi can reach 33°C, while at night they dip to 24°C. Finish up your sightseeing early on the 12th (Sun) so you can go by car to Canakkale.
more less

Selcuk
Highlights from your plan

A center of landmarks from Roman, Byzantine, and Ottoman eras, Canakkale showcases natural beauty and myth.

Kick off your visit on the 12th (Sun): contemplate in the serene atmosphere at Namazgah Tabyalari, stroll the grounds of SoganlIdere Sehitligi, stroll through Kabatepe Kumsali, contemplate the long history of Anzac Cove, then contemplate the long history of Akbas Sehitligi, and finally explore the historical opulence of Bigali Kalesi. Get ready for a full day of sightseeing on the 13th (Mon): enjoy the sand and surf at Dardanos Beach, take an in-depth tour of Troya Muzesi, then learn about all things military at Military Marine Museum, then don't miss a visit to Saat Kulesi, and finally explore the galleries of Rhapsodos Mozaik.

For other places to visit, where to stay, ratings, and tourist information, read Canakkale trip itinerary planning tool.

Things to do in Canakkale

Anzac Cove
Highlights from your plan