For other places to visit, photos, and more tourist information, you can read our Santa Elena online trip maker.

Madrid to Santa Elena is an approximately 3-hour car ride. Traveling from Madrid in July, expect slightly colder with lows of °C in Santa Elena. You'll have a few hours on the 27th (Mon) to wrap things up before traveling to Granada.
more less

Things to do in Santa Elena

You can drive from Santa Elena to Granada in 2 hours. Expect somewhat warmer evenings in Granada when traveling from Santa Elena in July, with lows around °C. On the 7th (Fri), you'll travel to Antequera.
more less

©
Court of the Lions 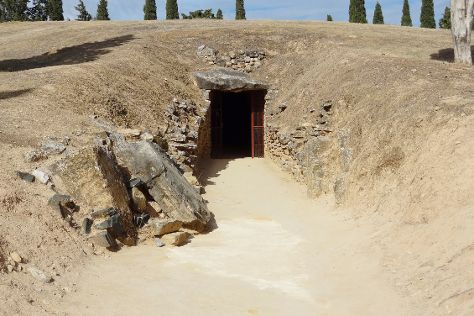 ©
Explore hidden gems such as Dolmen de Menga and Convento de la Trinidad. Alcazaba de Antequera and Convento de Belen will appeal to history buffs. Step out of Antequera with an excursion to Chapel of Our Lady of Grace in Archidona--about 30 minutes away.

For where to stay, reviews, photos, and more tourist information, you can read our Antequera day trip website.

Getting from Granada to Antequera by car takes about 1.5 hours. Other options: take a train; or take a bus. In August, plan for daily highs up to °C, and evening lows to °C. Finish your sightseeing early on the 10th (Mon) so you can take a train back home.
more less

Things to do in Antequera

Archidona
Highlights from your plan