On the 3rd (Wed), don't miss a visit to Pantheon, look for gifts at Bottega Del Pantheon, then delve into the distant past at Palatine Hill, and finally delve into the distant past at Colosseum. Keep things going the next day: wander the streets of Trastevere, admire the masterpieces at Vatican Museums, and then take a stroll through Via Condotti.

To find other places to visit, ratings, and other tourist information, read our Rome itinerary planner.

Toronto, Canada to Rome is an approximately 12.5-hour flight. You can also do a combination of bus and flight. Due to the time zone difference, you'll lose 6 hours traveling from Toronto to Rome. Traveling from Toronto in April, expect Rome to be a bit warmer, temps between 24°C and 11°C. Wrap up your sightseeing on the 5th (Fri) to allow time to drive to Positano.
more less

Vatican Museums
Highlights from your plan

Take a break from the city and head to Otium Spa Costa d'Amalfi and Sentiero degli dei (Path of the Gods). Head to Sol’Art Ceramiche and Ceramiche D'Arte Pascalfor some retail therapy. You'll find plenty of places to visit near Positano: Ravello (Villa Cimbrone Gardens & Villa Rufolo) and Duomo di Sant'Andrea (in Amalfi). There's still lots to do: enjoy the sand and surf at Fornillo, Head underground at Grotta di Fornillo, and stroll through Spiaggia Grande.

To see reviews, photos, where to stay, and other tourist information, refer to the Positano vacation planner .

Getting from Rome to Positano by car takes about 3.5 hours. Other options: do a combination of train and subway; or take a bus. Traveling from Rome in April, you can expect nighttime temperatures to be a bit warmer in Positano, with lows of 15°C. Wrap up your sightseeing by early afternoon on the 8th (Mon) to allow time for the car ride to Naples.
more less 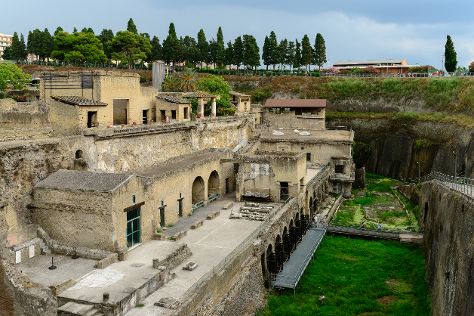 ©
Naples is the capital of the Italian region Campania and the third-largest municipality in Italy after Rome and Milan. Kick off your visit on the 8th (Mon): listen to music at Keste. Get ready for a full day of sightseeing on the next day: delve into the distant past at Ruins of Herculaneum and then make a trip to Gli Scavi Archeologici di Pompei.

To see where to stay, traveler tips, reviews, and other tourist information, you can read our Naples trip planner.

Traveling by car from Positano to Naples takes 1.5 hours. Alternatively, you can take a bus; or do a combination of bus and subway. In April, plan for daily highs up to 23°C, and evening lows to 13°C. Finish up your sightseeing early on the 10th (Wed) so you can catch the train to Florence.
more less

Shop till you drop at Florence Shop 4 It and Mercato Centrale. Get some cultural insight at Academy Of Florence Art Gallery and Pitti Palace. And it doesn't end there: admire the masterpieces at Uffizi Galleries, take some stellar pictures from Piazzale Michelangelo, take in the views from Ponte Vecchio, and appreciate the history behind Campanile di Giotto.

To see maps, reviews, and tourist information, you can read our Florence travel route builder tool .

Traveling by train from Naples to Florence takes 3 hours. Alternatively, you can do a combination of train and flight; or drive. In April, plan for daily highs up to 22°C, and evening lows to 11°C. Wrap up your sightseeing on the 13th (Sat) to allow time to take a train to Venice.
more less 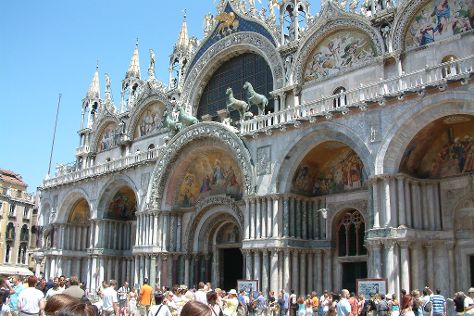 You can take a train from Florence to Venice in 2.5 hours. Alternatively, you can drive; or take a bus. In April, daily temperatures in Venice can reach 21°C, while at night they dip to 11°C. On the 15th (Mon), wrap the sightseeing up by early afternoon so you can take a train to Milan.
more less

Kick off your visit on the 15th (Mon): admire the striking features of Galleria Vittorio Emanuele II.

You can take a train from Venice to Milan in 2.5 hours. Alternatively, you can drive; or do a combination of train and flight. In April, daytime highs in Milan are 22°C, while nighttime lows are 9°C. Finish your sightseeing early on the 17th (Wed) so you can take a train to Rome.
more less

Start off your visit on the 17th (Wed): wander the streets of Rione Regola, then wander the streets of Campo de' Fiori, then make a trip to St. Peter's Basilica, and finally browse for treasures at Serra. Get ready for a full day of sightseeing on the next day: admire the masterpieces at Galleria Borghese, then browse the eclectic array of goods at Porta Portese, then get to know the fascinating history of Piazza Navona, and finally take in the exciting artwork at I Colori di Dentro di Maria Grazia Luffarelli.

For other places to visit and other tourist information, you can read our Rome online vacation builder .

Getting from Milan to Rome by train takes about 3 hours. Other options: fly; or drive. On the 19th (Fri), wrap the sightseeing up by early afternoon so you can travel back home.
more less