On the 2nd (Fri), snap pictures at Ponte de Dom Luis I, take in the spiritual surroundings of Bom Jesus do Monte, then take in the architecture and atmosphere at Se de Braga, then get to know the fascinating history of Centro Historico de Guimaraes, and finally step into the grandiose world of Guimaraes Castle. Here are some ideas for day two: contemplate the waterfront views at Douro River, take a stroll around Palacio da Bolsa, then contemplate in the serene atmosphere at Porto Cathedral (Se Catedral), then take in panoramic vistas at Torre dos Clerigos, and finally shop like a local with Belomonte 20.

San Juan, Puerto Rico to Porto is an approximately 13.5-hour flight. The time zone difference when traveling from San Juan to Porto is 4 hours. Expect a bit cooler weather when traveling from San Juan in August: highs in Porto hover around 28°C, while lows dip to 17°C. Cap off your sightseeing on the 3rd (Sat) early enough to travel to Lisbon.
more less

To find where to stay, reviews, ratings, and more tourist information, go to the Lisbon road trip tool.

Getting from Porto to Lisbon by flight takes about 3 hours. Other options: drive; or take a train. Expect a bit warmer weather when traveling from Porto in August: highs in Lisbon hover around 35°C, while lows dip to 20°C. Wrap up your sightseeing on the 7th (Wed) to allow time to travel to Seville.
more less

Deepen your sense of the past at sights like Plaza de España and Basilica de la Macarena. You'll discover tucked-away gems like Barrio Santa Cruz and Centro Historico de Sevilla. Next up on the itinerary: steep yourself in history at Royal Alcázar of Seville, pause for some serene contemplation at Iglesia Colegial del Salvador, admire the striking features of Torre del Oro, and see where the action happens at Real Maestranza de Caballeria de Sevilla.

To see ratings, more things to do, maps, and more tourist information, use the Seville road trip tool.

You can fly from Lisbon to Seville in 4.5 hours. Alternatively, you can drive; or take a bus. The time zone changes from Western European Standard Time to Central European Standard Time, which is usually a 1 hour difference. In August, daytime highs in Seville are 38°C, while nighttime lows are 23°C. Wrap up your sightseeing on the 10th (Sat) early enough to travel to Marrakech.
more less

On the 11th (Sun), take in nature's colorful creations at Jardin Majorelle, make a trip to Jemaa el-Fna, and then admire the masterpieces at Maison de la Photographie de Marrakech.

For more things to do, where to stay, photos, and other tourist information, refer to the Marrakech trip maker tool. 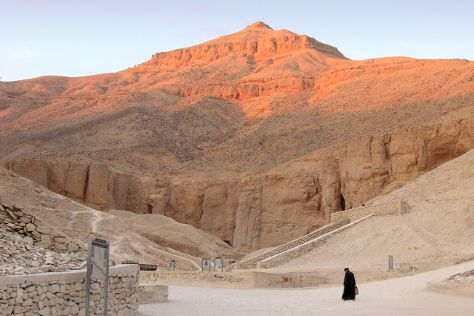 For maps, photos, reviews, and other tourist information, go to the Luxor trip planner.

Traveling by combination of train and flight from Marrakech to Luxor takes 12.5 hours. Alternatively, you can fly. You'll lose 2 hours traveling from Marrakech to Luxor due to the time zone difference. In August, Luxor is a bit warmer than Marrakech - with highs of 49°C and lows of 32°C. Cap off your sightseeing on the 12th (Mon) early enough to travel to Barcelona.
more less

Popular historic sites such as Basilica of the Sagrada Familia and Vila Vella (Old Town) are in your itinerary. You'll discover tucked-away gems like Barcelona Cathedral and Scuba & Snorkeling. There's still lots to do: stroll around Parc Guell, take a stroll through El Barri Gòtic, admire the striking features of Casa Batllo, and make a trip to Casa Mila - La Pedrera.

Step off the beaten path and head to Alcazar of Segovia and Catedral de Segovia. Do some cultural sightseeing at Prado National Museum and Royal Palace of Madrid. Step out of Madrid to go to Segovia and see La Muralla de Segovia, which is approximately 1h 10 min away. And it doesn't end there: hunt for treasures at Mercado San Miguel, explore the world behind art at Museo Nacional Centro de Arte Reina Sofia, examine the collection at Monasterio de las Descalzas Reales, and take in the exciting artwork at Rio Creative Art Center.

To see more things to do, where to stay, ratings, and tourist information, refer to the Madrid trip itinerary builder site.

Getting from Barcelona to Madrid by train takes about 3.5 hours. Other options: fly; or drive. Traveling from Barcelona in August, you will find days in Madrid are somewhat warmer (39°C), and nights are little chillier (22°C). Finish up your sightseeing early on the 18th (Sun) so you can travel back home.
more less

Segovia
Highlights from your plan