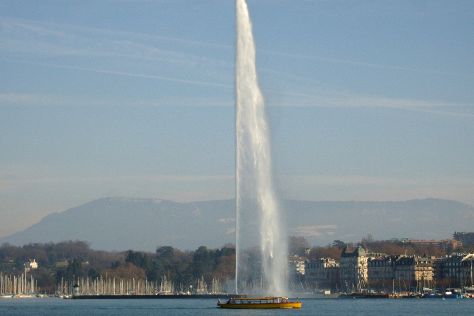 Get outdoors at Centre Geneve de Vol Libre – Paradelta and Bains des Paquis. You'll explore the less-touristy side of things at Vieux-Carouge and Musee des Suisses Dans Le Monde. Explore the numerous day-trip ideas around Geneva: Nyon (Le Temple de Nyon, Roman Columns, &more). The adventure continues: take in the architecture and atmosphere at Notre Dame Basilica, take in the exciting artwork at MB&F M.A.D.Gallery, examine the collection at Musee Ariana, and capture your vacation like a pro with Salva Fauna.

To see where to stay, photos, other places to visit, and tourist information, go to the Geneva trip itinerary builder tool.

London, UK to Geneva is an approximately 5-hour flight. You can also take a train; or do a combination of car and train. Due to the time zone difference, you'll lose 1 hour traveling from London to Geneva. When traveling from London in July, plan for somewhat warmer days in Geneva, with highs around 32°C, while nights are about the same with lows around 17°C. Wrap up your sightseeing by early afternoon on the 7th (Thu) to allow enough time to drive to Lausanne.
more less

Nyon, Vieux-Carouge
Highlights from your plan 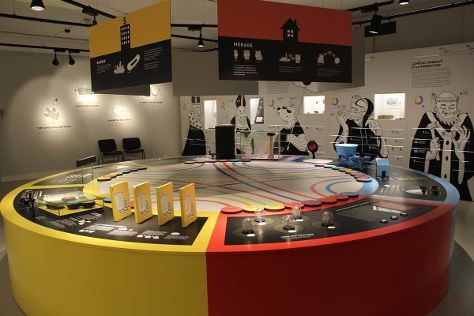 Kick off your visit on the 7th (Thu): pause for some serene contemplation at Church of St. Francis and then steep yourself in history at Tour de l'Ale. Keep things going the next day: see the interesting displays at Museum of Zoology - Lausanne, appreciate the extensive heritage of Place de la Palud, step into the grandiose world of Palais De Rumine, then appreciate the extensive heritage of Escaliers du Marche, and finally see the interesting displays at Musee Historique de Lausanne.

To see other places to visit, maps, ratings, and other tourist information, read our Lausanne road trip planning tool.

Traveling by car from Geneva to Lausanne takes an hour. Alternatively, you can take a train; or take a bus. Finish up your sightseeing early on the 8th (Fri) so you can go by car to Verbier.
more less

To find ratings, photos, other places to visit, and more tourist information, refer to the Verbier tour builder tool.

Traveling by car from Lausanne to Verbier takes 1.5 hours. Alternatively, you can take a train. Wrap up your sightseeing on the 10th (Sun) to allow time to drive to Crans-Montana.
more less

Things to do in Verbier

©
Crans-Montana is a municipality in the district of Sierre in the canton of Valais, Switzerland. Start off your visit on the 11th (Mon): explore the activities along Etang Grenon, then take in the dramatic natural features at Plaine-Morte - Glacial Plateau, then pause for some serene contemplation at Felsenkirche Eglise St.Michael, and finally pause for some serene contemplation at Burgkirche Raron. Keep things going the next day: see the interesting displays at Fondation Suisse des Trains Miniatures, look for gifts at David L'instant Chocolat, and then examine the collection at Fondation Pierre Arnaud.

For more things to do, where to stay, maps, and tourist information, use the Crans-Montana day trip planning app.

Traveling by car from Verbier to Crans-Montana takes 2 hours. On the 12th (Tue), wrap the sightseeing up by early afternoon so you can travel to Gstaad.
more less

Things to do in Crans-Montana

©
Gstaad is a village in the German-speaking section of the Canton of Bern in southwestern Switzerland. Get ready for a full day of sightseeing on the next day: hike along Yehudi Menuhin's Philosophers Trail, hike along Lake Lauenen - Geltenhutte SAC - Lauenensee, and then take in the dramatic scenery at Sibe Brunne.

You can drive from Crans-Montana to Gstaad in 2.5 hours. On the 15th (Fri), you'll have the morning to explore before heading off to Orselina.
more less

Things to do in Gstaad

Historical village of Saanen, Sibe Brunne
Highlights from your plan 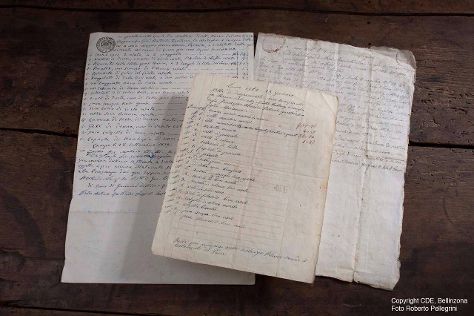 ©
On the 15th (Fri), play a few rounds at Sake Golf and then view the masterpieces at OnArte. Get ready for a full day of sightseeing on the next day: examine the collection at Centro Visitatori AlpTransit San Gottardo, take in the spiritual surroundings of Chiesa Prepositurale dei Santi Pietro e Paolo, take in the spiritual surroundings of Chiesa di San Nicolao, admire the sheer force of The Froda Waterfall, then get engrossed in the history at Museo di Valmaggia, and finally get outside with Foroglio Val Bavona.

For maps, photos, reviews, and tourist information, you can read our Orselina visit website.

You can drive from Gstaad to Orselina in 4 hours. Expect a daytime high around 33°C in July, and nighttime lows around 20°C. Finish your sightseeing early on the 16th (Sat) to allow enough time to drive to Lugano.
more less

Things to do in Orselina 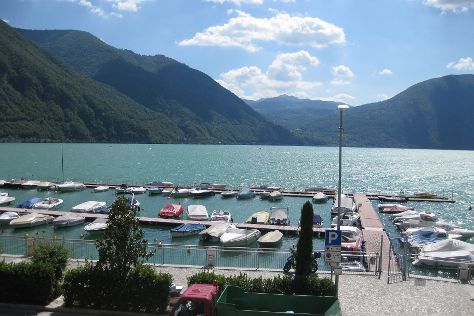 To see maps, traveler tips, where to stay, and tourist information, you can read our Lugano tour app.

Traveling by car from Orselina to Lugano takes an hour. Expect a daytime high around 33°C in July, and nighttime lows around 20°C. Wrap up your sightseeing on the 18th (Mon) to allow time to drive to St. Moritz.
more less

On your second day here, contemplate in the serene atmosphere at Kirche San Karl St. Moritz-Bad, explore the activities along Lake St. Moritz, admire the masterpieces at Berry Museum, then contemplate the long history of The Leaning Tower, Engadin St. Moritz, and finally don't miss a visit to Chesa Futura.

To find other places to visit, more things to do, reviews, and tourist information, you can read our St. Moritz travel route website.

Traveling by car from Lugano to St. Moritz takes 3 hours. Alternatively, you can take a bus. Traveling from Lugano in July, expect St. Moritz to be little chillier, temps between 24°C and 13°C. Cap off your sightseeing on the 20th (Wed) early enough to travel back home.
more less

Lake Silvaplana
Highlights from your plan