©
Naples is the capital of the Italian region Campania and the third-largest municipality in Italy after Rome and Milan. On the 2nd (Sat), contemplate in the serene atmosphere at Chiesa di San Gregorio Armeno, see the interesting displays at Ospedale delle Bambole, take an in-depth tour of Museo delle Torture, stop by Salumeria Rafele o' Lattaro, then wander the streets of Decumani di Napoli, and finally make a trip to Piazza del Gesu Nuovo. Keep things going the next day: make a trip to Acquaquiglia del Pozzaro, explore the historical opulence of Castel Capuano, delve into the distant past at House of Menander (Casa del Menandro), delve into the distant past at Odeon - Teatro Piccolo, then delve into the distant past at Casa del Poeta Tragico, and finally explore the ancient world of Temple of Jupiter.

Mumbai, India to Naples is an approximately 13.5- hour flight. You can also do a combination of flight and train. The time zone changes from India Standard Time (IST) to Central European Standard Time (CET), which is usually a -4.5 hour difference. In October, Naples is slightly colder than Mumbai - with highs of 27°C and lows of 17°C. Wrap up your sightseeing on the 3rd (Sun) to allow time to ride a ferry to Sorrento.
more less

Pompeii, Ercolano
Highlights from your plan

On the 4th (Mon), take in the architecture and atmosphere at Cattedrale di Sorrento, pause for some serene contemplation at Duomo dei San Filippo e Giacomo, admire the verdant scenery at Il Vallone dei Mulini, admire the natural beauty at Villa Comunale, then don't miss a visit to Piazza Sant'Antonino, and finally take in the spiritual surroundings of Basilica di Sant'Antonino. Get ready for a full day of sightseeing on the next day: savor the flavors at Antichi Sapori d'Amalfi, appreciate the extensive heritage of Centro Storico, then take in the spiritual surroundings of Cloister del Paradiso, then admire the verdant scenery at Valle dei Mulini, and finally admire the masterpieces at Correale di Terranova Museum.

To find other places to visit, reviews, more things to do, and other tourist information, go to the Sorrento trip planner.

Getting from Naples to Sorrento by ferry takes about an hour. Other options: take a subway; or drive. Expect a daytime high around 26°C in October, and nighttime lows around 20°C. Wrap up your sightseeing on the 5th (Tue) early enough to travel to Lampedusa.
more less

Amalfi
Highlights from your plan 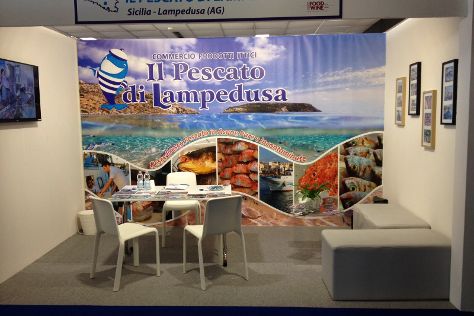 To see reviews, more things to do, where to stay, and tourist information, read our Lampedusa online trip builder.

Kick off your visit on the 7th (Thu): examine the collection at Pavone Francesco, explore the world behind art at Palazzo Duchi di Santo Stefano, take in the exciting artwork at Kerameion, appreciate the extensive heritage of Palazzo Ciampoli di Taormina, then get outside with Lido la Pigna, and finally pause for some serene contemplation at Chiesa di Santa Domenica.

Kick off your visit on the 8th (Fri): kick back and relax at Caletta del Bue Marino, tour the pleasant surroundings at Spiaggia di Santa Margherita, delve into the distant past at Tonnara del Secco, enjoy the sand and surf at Lido San Vito, then tour the pleasant surroundings at Stabilimento Balneare Al Sabbione, and finally take in the architecture and atmosphere at Santuario Di San Vito.

To see other places to visit, reviews, photos, and other tourist information, use the San Vito lo Capo route builder site.

To see other places to visit, traveler tips, and other tourist information, use the San Teodoro trip itinerary planner.

Things to do in San Teodoro 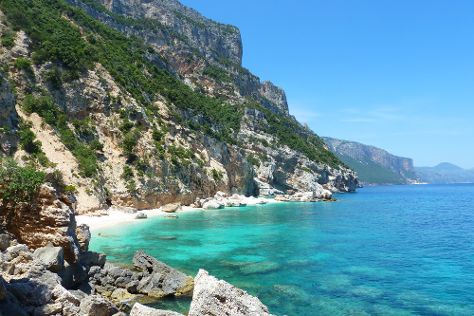 ©
Baunei is a comune (municipality) in the Province of Nuoro in the Italian island of Sardinia.GeographyThe municipality of Baunei is located about 100km northeast of Cagliari and about 11km north of Tortolì. Start off your visit on the 10th (Sun): enjoy the sand and surf at San Giovanni, take in the architecture and atmosphere at Chiesa Dell'assunta DI Santa Maria Navarrese, take a leisurely stroll along Marina Marina di Baunei and Santa Maria Navarrese, trek along Selvaggio Blu, then kick back and relax at Cala Biriala, and finally enjoy the sand and surf at Cala dei Gabbiani.

For photos, ratings, where to stay, and tourist information, refer to the Baunei online travel route planner.

You can drive from San Teodoro to Baunei in 2 hours. Alternatively, you can take a bus. Expect somewhat warmer evenings in Baunei when traveling from San Teodoro in October, with lows around 19°C. Finish up your sightseeing early on the 10th (Sun) so you can go by car to Alghero.
more less

Selvaggio Blu
Highlights from your plan

On the 11th (Mon), appreciate the extensive heritage of Piazza Civica, pause for some serene contemplation at Chiesa di San Francesco, kick back and relax at Lido San Giovanni, take advantage of the amenities at Summer Dream, then make a trip to Affacci a mare: Bastioni e Lungomare, and finally take in the pleasant sights at Centro storico.

To see other places to visit, where to stay, reviews, and more tourist information, read our Alghero tour itinerary planner.

Drive from Baunei to Alghero in 3.5 hours. Alternatively, you can do a combination of taxi and train; or take a bus. Plan for slightly colder nights when traveling from Baunei in October since evenings lows in Alghero dip to 15°C. Wrap up your sightseeing on the 11th (Mon) to allow time to travel to Venice.
more less

Kick off your visit on the 12th (Tue): take a stroll through Campo Santa Margherita, take in the architecture and atmosphere at Church of San Pantalon, step into the grandiose world of Palazzo Mocenigo, explore the world behind art at Ca' Pesaro Galleria Internazionale d'Arte Moderna, then contemplate in the serene atmosphere at Santa Maria dei Miracoli, and finally get advice or help at Museo Querini Stampalia.

To see photos, maps, more things to do, and more tourist information, use the Assisi driving holiday app.

Traveling by car from Venice to Assisi takes 4.5 hours. Alternatively, you can take a train; or do a combination of flight and train. In October, daytime highs in Assisi are 24°C, while nighttime lows are 12°C. Finish your sightseeing early on the 13th (Wed) so you can drive to Orvieto.
more less

The striking town of Orvieto, perched on a volcanic cliff overlooking the Umbrian countryside, is known as the Green Heart of Italy.

Before you visit Orvieto, use our trip planner to discover what you can do and see there.

Getting from Assisi to Orvieto by car takes about 1.5 hours. Other options: take a train; or take a bus. In October, daily temperatures in Orvieto can reach 24°C, while at night they dip to 13°C. Wrap up your sightseeing on the 17th (Sun) to allow time to travel back home.
more less

Things to do in Orvieto