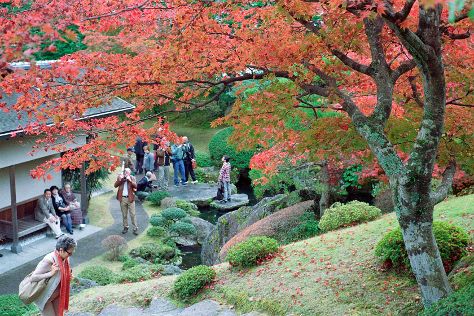 Hakone Museum of Art and Tokyo National Museum The Heiseikan will appeal to museum buffs. Do some cultural sightseeing at Hakone Shrine / Kuzuryu Shrine Singu and Hase-dera Temple. Venture out of the city with trips to Katori (Katori Jingu Shrine, Historic Old Town area in Sawara, Katori, &more), Narita (Naritasan Omote Sando & Naritasan Shinsho-ji Temple) and Chichibu (Mitsumine Shrine & Mitsumine Shrine Okumiya). There's much more to do: contemplate the long history of Kencho-ji Temple, make a trip to Nezu Shrine, take in the spiritual surroundings of Kanda Myojin, and explore the world behind art at teamLab☆Planets.

Find out how to plan Tokyo trip without stress by asking Inspirock to help create an itinerary.

Montreal, Canada to Tokyo is an approximately 16.5-hour flight. The time zone changes from Eastern Standard Time to Japan Standard Time, which is usually a 14 hour difference. Plan for a bit warmer temperatures traveling from Montreal in November, with highs in Tokyo at °C and lows at °C. Cap off your sightseeing on the 11th (Wed) early enough to catch the train to Kyoto.
more less

Explore hidden gems such as Tenryuji Temple and Nanzen-ji Temple. Deepen your sense of the past at sights like Fushimi Inari-taisha Shrine and Eikando Zenrinji Temple. Explore Kyoto's surroundings by going to Hikone Castle (in Hikone) and Ise (Tsukiyominomiya, Ise Shrine Geku, &more). Next up on the itinerary: contemplate the long history of Tofuku-ji Temple, take in the spiritual surroundings of Shoren-in Temple (Shoren-in Monzeki), don't miss a visit to Kiyomizu-dera Temple, and explore the historical opulence of Nijo Castle.

To find reviews, photos, where to stay, and tourist information, read our Kyoto road trip planner.

Traveling by train from Tokyo to Kyoto takes 3 hours. Alternatively, you can fly; or drive. November in Kyoto sees daily highs of °C and lows of °C at night. Cap off your sightseeing on the 16th (Mon) early enough to catch the train to Osaka.
more less

To see more things to do, photos, ratings, and other tourist information, refer to the Osaka road trip tool.

Getting from Kyoto to Osaka by train takes about 1.5 hours. Other options: drive; or take a bus. In November, plan for daily highs up to °C, and evening lows to °C. Finish up your sightseeing early on the 20th (Fri) so you can travel back home.
more less