For ratings, photos, where to stay, and other tourist information, refer to the Mexico City itinerary tool .

Cape Town, South Africa to Mexico City is an approximately 29-hour flight. You can also do a combination of flight and bus; or do a combination of flight, bus, and tram. Traveling from Cape Town to Mexico City, you'll gain 8 hours due to the time zone difference. Plan for slightly colder temperatures traveling from Cape Town in December, with highs in Mexico City at 26°C and lows at 9°C. Finish your sightseeing early on the 30th (Sun) to allow enough time to travel to Puerto Vallarta.
more less 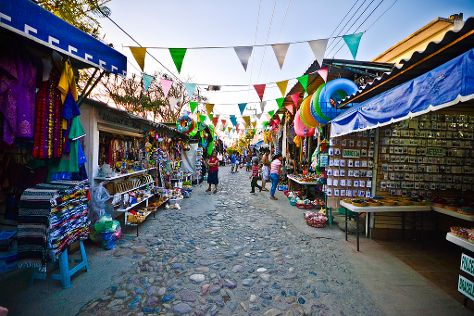 Start off your visit on the 31st (Mon): tour the pleasant surroundings at Bucerias and then take in the waterfront at Puerto Vallarta's El Malecon Boardwalk. On the 1st (Tue), you'll have a packed day of sightseeing: contemplate in the serene atmosphere at The Church of Our Lady of Guadalupe, look for gifts at Faith Colectiva, then get to know the fascinating history of Zona Romantica, and finally take in nature's colorful creations at Vallarta Botanical Gardens.

To see ratings, reviews, where to stay, and more tourist information, use the Puerto Vallarta vacation tool .

You can fly from Mexico City to Puerto Vallarta in 3.5 hours. Other options are to do a combination of bus and flight; or drive. In December, Puerto Vallarta is a bit warmer than Mexico City - with highs of 32°C and lows of 22°C. Cap off your sightseeing on the 1st (Tue) early enough to travel to Cozumel.
more less

Start off your visit on the 2nd (Wed): take a tour by water with Boat Tours & Water Sports. Get ready for a full day of sightseeing on the next day: get your game on at Clear Lounge Cozumel and then tour the pleasant surroundings at Playa Palancar.

For other places to visit, photos, where to stay, and more tourist information, go to the Cozumel trip planner.

Fly from Puerto Vallarta to Cozumel in 8 hours. Alternatively, you can do a combination of bus and flight; or do a combination of bus and ferry. The time zone changes from Central Standard Time to Eastern Standard Time, which is usually a 1 hour difference. Expect a daytime high around 30°C in January, and nighttime lows around 22°C. Finish your sightseeing early on the 3rd (Thu) to allow enough time to travel to Tulum.
more less

When in Tulum, make a side trip to see Cobá Zona Arqueológica Cobá in Coba, approximately 44 minutes away. Plan for a day of cool, family-friendly fun on the 4th (Fri) at Xel-Ha. And it doesn't end there: explore the ancient world of Ruins of Tulum, don't miss a visit to Plastic Flamingo, contemplate the waterfront views at Grand Cenote, and head outdoors with Ana y Jose Beach Club.

You can do a combination of taxi, ferry, and bus from Cozumel to Tulum in 2.5 hours. In January, daytime highs in Tulum are 30°C, while nighttime lows are 22°C. Finish your sightseeing early on the 6th (Sun) to allow enough time to drive to Chichen Itza.
more less

Kick off your visit on the 7th (Mon): explore the ancient world of El Castillo and then delve into the distant past at Chichen Itza.

To find out how to plan a trip to Chichen Itza, use our trip itinerary maker.

Getting from Tulum to Chichen Itza by car takes about 2 hours. Other options: take a shuttle; or take a bus. Traveling from Tulum in January, plan for a bit warmer nights in Chichen Itza, with lows around 26°C. Finish up your sightseeing early on the 7th (Mon) so you can go by car to Cancun.
more less

Explore the numerous day-trip ideas around Cancun: Playa del Carmen (Scuba & Snorkeling & Quinta Avenida). There's much more to do: get close to the beloved marine mammals with a swim-with-the-dolphins experience, look for gifts at Plaza Las Americas, go for a walk through Av Kukulkan, and buy something for everyone on your list at La Isla Shopping Village.

To see maps, more things to do, ratings, and more tourist information, you can read our Cancun travel route builder website .

Getting from Chichen Itza to Cancun by car takes about 2.5 hours. Other options: take a shuttle; or take a bus. Traveling from Chichen Itza in January, plan for slightly colder nights in Cancun, with lows around 22°C. Wrap up your sightseeing by early afternoon on the 11th (Fri) to allow enough time to travel back home.
more less