On the 13th (Thu), delve into the distant past at Pantheon, appreciate the extensive heritage of Piazza Navona, then pause for some serene contemplation at Santa Maria in Trastevere, then explore the different monuments and memorials at Catacombe di San Callisto, and finally delve into the distant past at Colosseum. On the 14th (Fri), you'll have a packed day of sightseeing: admire the masterpieces at Vatican Museums, steep yourself in history at St. Peter's Basilica, and then steep yourself in history at Palatine Hill.

For traveler tips, other places to visit, more things to do, and tourist information, read our Rome trip planner .

Chennai, India to Rome is an approximately 15-hour flight. You can also do a combination of flight and train; or do a combination of train and flight. Traveling from Chennai to Rome, you'll gain 4 hours due to the time zone difference. In February, Rome is cooler than Chennai - with highs of 16°C and lows of 5°C. Finish your sightseeing early on the 14th (Fri) so you can take a train to Florence.
more less 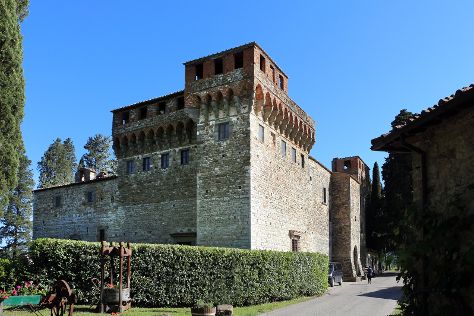 Start off your visit on the 15th (Sat): learn about winemaking at Castello del Trebbio, then see the interesting displays at Academy Of Florence Art Gallery, then get engrossed in the history at Basilica di Santa Croce, and finally get to know the fascinating history of Piazza del Duomo. Here are some ideas for day two: enjoy breathtaking views from Campanile di Giotto, contemplate in the serene atmosphere at Cathedral of Santa Maria del Fiore, snap pictures at Ponte Vecchio, then explore the world behind art at Pitti Palace, and finally steep yourself in history at The Baptistery of St. John.

You can take a train from Rome to Florence in 2 hours. Other options are to drive; or fly. In February, plan for daily highs up to 14°C, and evening lows to 5°C. Wrap up your sightseeing on the 16th (Sun) early enough to travel to Barcelona.
more less

Start off your visit on the 17th (Mon): stroll through Playa de La Barceloneta, then take in the architecture and atmosphere at Barcelona Cathedral, then appreciate the extensive heritage of El Barri Gòtic, and finally take a stroll through Ciutat Vella. On the 18th (Tue), you'll have a packed day of sightseeing: stroll around Parc Guell, then admire the landmark architecture of Basilica of the Sagrada Familia, then don't miss a visit to Casa Batllo, and finally browse the fresh offerings at La Boqueria.

To find other places to visit, reviews, and more tourist information, refer to the Barcelona trip itinerary planner .

You can fly from Florence to Barcelona in 5 hours. Other options are to do a combination of train and flight; or drive. In February, daily temperatures in Barcelona can reach 17°C, while at night they dip to 7°C. Wrap up your sightseeing on the 18th (Tue) to allow time to travel to Paris.
more less

Start off your visit on the 19th (Wed): appreciate the extensive heritage of Île de la Cité, shop like a local with Le Marais, then contemplate the long history of Eiffel Tower, and finally shop like a local with Champs-Elysees. Here are some ideas for day two: admire the landmark architecture of Louvre Museum, pause for some serene contemplation at Basilique du Sacre-Coeur de Montmartre, and then take a stroll through Montmartre.

To see more things to do, reviews, ratings, and more tourist information, go to the Paris trip maker .

You can fly from Barcelona to Paris in 5 hours. Alternatively, you can do a combination of train and flight; or drive. Plan for slightly colder temperatures traveling from Barcelona in February, with highs in Paris at 9°C and lows at 1°C. Wrap up your sightseeing on the 20th (Thu) to allow time to take a train to Amsterdam.
more less

Traveling by train from Paris to Amsterdam takes 3.5 hours. Alternatively, you can fly; or drive. Expect a daytime high around 7°C in February, and nighttime lows around 0°C. Cap off your sightseeing on the 22nd (Sat) early enough to travel to Zurich.
more less

Start off your visit on the 23rd (Sun): shop like a local with Bahnhofstrasse, then take in the spiritual surroundings of Fraumünster Church, then pause for some serene contemplation at Grossmunster, and finally wander the streets of Old Town. Get ready for a full day of sightseeing on the 24th (Mon): view the masterpieces at Foundation E. G. Buhrle Collection, then explore the activities along Lake Zurich, and then see the interesting displays at Uhrenmuseum Beyer Zürich.

To see other places to visit, more things to do, photos, and other tourist information, refer to the Zurich trip itinerary builder app .

Getting from Amsterdam to Zurich by flight takes about 4.5 hours. Other options: do a combination of flight and train; or drive. In February, daytime highs in Zurich are 7°C, while nighttime lows are -1°C. Cap off your sightseeing on the 24th (Mon) early enough to go by car to Munich.
more less

Kick off your visit on the 25th (Tue): contemplate the waterfront views at English Garden, then contemplate the long history of Nymphenburg Palace, and then take in the spiritual surroundings of St. Peter's Church. Keep things going the next day: examine the collection at Munich Residenz and then surround yourself with nature on a nature and wildlife tour.

For more things to do, photos, traveler tips, and tourist information, refer to the Munich online travel route builder .

You can drive from Zurich to Munich in 3.5 hours. Other options are to fly; or do a combination of flight and train. February in Munich sees daily highs of 5°C and lows of -3°C at night. Finish your sightseeing early on the 27th (Thu) to allow enough time to travel back home.
more less