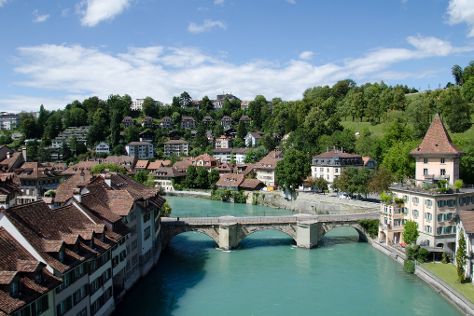 You've now added Swiss Chocolate Train to your itinerary. Explore hidden gems such as Gurten and Adelboden. Cathedrale St-Nicolas and Schloss Thun will appeal to history buffs. Explore Bern's surroundings by going to Oberhofen Castle (in Oberhofen am Thunersee), Villars Gryon Les Diablerets Bex (in Villars-sur-Ollon) and Creux du Van (in Gorgier). Next up on the itinerary: contemplate the waterfront views at Aare River, wander the streets of Basel's Old Town, make a trip to Bundesplatz, and tour the pleasant surroundings at Glacier 3000.

To see traveler tips, where to stay, more things to do, and tourist information, refer to the Bern trip itinerary maker app.

If you are flying in from Canada, the closest major aiports are Zürich Airport, Bern Belp Airport and EuroAirport Basel-Mulhouse-Freiburg Airport. December in Bern sees daily highs of 5°C and lows of -3°C at night. Cap off your sightseeing on the 2nd (Thu) early enough to travel back home.
more less