When in Paris, make a side trip to see Palace of Versailles in Versailles, approximately 48 minutes away. There's still lots to do: explore the world behind art at Louvre Museum, explore and take pictures at Eiffel Tower, explore the galleries of Centre National d'Art et de Culture George Pompidou, and get a taste of the local shopping with Champs-Elysees.

For where to stay, ratings, photos, and other tourist information, you can read our Paris trip itinerary tool .

Sao Paulo, Brazil to Paris is an approximately 15.5-hour flight. You can also do a combination of bus and flight. Due to the time zone difference, you'll lose 4 hours traveling from Sao Paulo to Paris. Traveling from Sao Paulo in November, things will get cooler in Paris: highs are around 12°C and lows about 6°C. Finish up your sightseeing early on the 25th (Wed) so you can travel to Vienna.
more less

Vienna is known for historic sites, museums, nightlife, parks, and zoos & aquariums. Your plan includes some of its best attractions: step into the grandiose world of Schonbrunn Palace, admire the landmark architecture of Rathaus, pause for some serene contemplation at St. Stephen's Cathedral, and learn about wildlife with up-close encounters at Schönbrunn Zoo.

To find where to stay, traveler tips, ratings, and tourist information, you can read our Vienna trip itinerary planner.

You can fly from Paris to Vienna in 5.5 hours. Other options are to take a train; or drive. Expect slightly colder evenings in Vienna when traveling from Paris in November, with lows around 3°C. Wrap up your sightseeing on the 1st (Tue) to allow time to drive to St. Margarethen.
more less

©
Start off your visit on the 2nd (Wed): get in on the family fun at Familypark.

To see where to stay, photos, ratings, and other tourist information, you can read our St. Margarethen online trip maker .

Drive from Vienna to St. Margarethen in an hour. Finish up your sightseeing early on the 2nd (Wed) so you can travel to Locarno.
more less

Things to do in St. Margarethen

Theme Parks
Highlights from your plan

Locarno's Mediterranean climate, palm trees, and 2,300 hours of sunlight per year make this city the warmest in Switzerland.

Explore your travel options from St. Margarethen to Locarno with the Route module. In December, daytime highs in Locarno are 10°C, while nighttime lows are 0°C. Wrap up your sightseeing on the 3rd (Thu) early enough to drive to Stresa.
more less

Things to do in Locarno 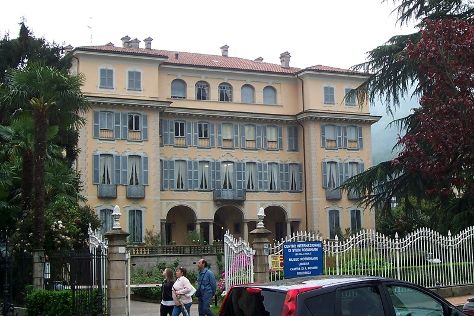 ©
Stresa is a town and comune of about 5,000 residents on the shores of Lake Maggiore in the province of Verbano-Cusio-Ossola in the Piedmont region of northern Italy, about 90km northwest of Milan. Kick off your visit on the 4th (Fri): admire the striking features of Villa Ducale.

Traveling by car from Locarno to Stresa takes an hour. Alternatively, you can ride a ferry; or take a train. December in Stresa sees daily highs of 10°C and lows of -2°C at night. Wrap up your sightseeing by early afternoon on the 4th (Fri) to allow time for travel back home.
more less