Kick off your visit on the 20th (Fri): identify plant and animal life at Lone Pine Koala Sanctuary and then tour the pleasant surroundings at Dicky Beach. On the 21st (Sat), you'll have a packed day of sightseeing: walk around South Bank Parklands, look for gifts at Noosa Chocolate Factory, and then kick back and relax at Moffat Beach.

To see maps, reviews, more things to do, and other tourist information, use the Brisbane trip itinerary maker tool.

Kuala Lumpur, Malaysia to Brisbane is an approximately 12.5-hour flight. The time zone difference moving from Malaysia Time (MYT) to Australian Eastern Standard Time (AEST) is 2 hours. Traveling from Kuala Lumpur in December, expect Brisbane to be a bit cooler, temps between 32°C and 23°C. You will have some time to spend on the 22nd (Sun) before leaving for Gold Coast.
more less

Caloundra
Highlights from your plan 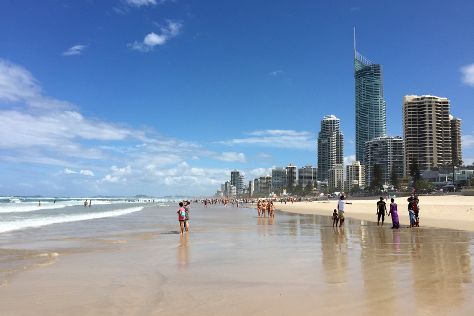 Your itinerary includes some good beach time at Surfers Paradise Beach and Burleigh Head National Park. For shopping fun, head to Pacific Fair Shopping Centre or Anthea Polson Art. There's much more to do: tour the pleasant surroundings at Burleigh Heads Beach, take in panoramic vistas at SkyPoint Observation Deck, identify plant and animal life at David Fleay Wildlife Park, and buy something for everyone on your list at Harbour Town Premium Outlets.

Plan my trip to Gold Coast with suggested itineraries provided by Inspirock.

Traveling by car from Brisbane to Gold Coast takes 1.5 hours. Alternatively, you can take a bus; or take a train. In December, daily temperatures in Gold Coast can reach 32°C, while at night they dip to 22°C. On the 25th (Wed), you'll have the morning to explore before heading off to Maleny.
more less

A large influx of people searching for a cooperative lifestyle migrate to Maleny every year.

Do your shopping at Kawana Shoppingworld and Art on Cairncross. Escape the urban bustle at Mary Cairncross Scenic Reserve and Obi Boardwalk. There's much more to do: look for gifts at Opals Down Under, admire the natural beauty at Maleny Botanic Gardens & Bird World, admire the sheer force of Gardners Falls, and browse the exhibits of Artworks in Clay by Anne Gentry-Smith.

Traveling by car from Gold Coast to Maleny takes 2.5 hours. Alternatively, you can do a combination of train and bus; or take a bus. December in Maleny sees daily highs of 32°C and lows of 23°C at night. Cap off your sightseeing on the 28th (Sat) early enough to go by car to Noosa.
more less

Things to do in Maleny

Artworks in Clay by Anne Gentry-Smith, Opals Down Under, Kawana Shoppingworld
Highlights from your plan 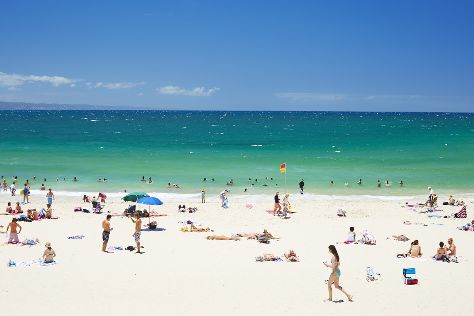 Known for its "green" development and north-facing beach, Noosa is a natural getaway.

Your itinerary includes some good beach time at Noosa Main Beach and Peregian Beach. Shop till you drop at Underground Surf and Hastings Street. Go for a jaunt from Noosa to Tin Can Bay to see Barnacles Dolphin Centre about 1h 10 min away. And it doesn't end there: explore the wealth of natural beauty at Noosa National Park, contemplate the waterfront views at Noosa River, and get great views at Laguna Lookout.

To find where to stay, other places to visit, traveler tips, and tourist information, go to the Noosa online trip itinerary builder.

Getting from Maleny to Noosa by car takes about 1.5 hours. Other options: take a bus; or do a combination of bus and train. Finish up your sightseeing early on the 31st (Tue) so you can go by car to Brisbane.
more less

Things to do in Noosa

You can drive from Noosa to Brisbane in 2 hours. Other options are to take a bus; or do a combination of bus and train. On the 2nd (Thu), you'll have the morning to explore before heading back home.
more less

Caloundra
Highlights from your plan