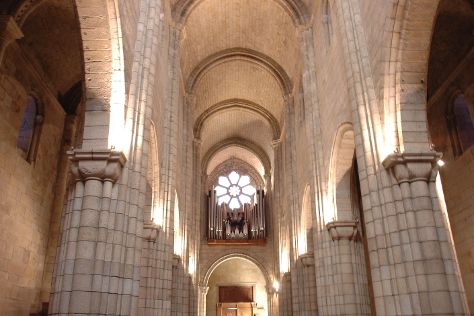 Appreciate the collections at Museu Serralves and Ferreira Cellars. Discover out-of-the-way places like Se de Braga and Offley Cellars. Change things up with these side-trips from Porto: Santuario de Santa Luzia (in Viana do Castelo) and Guimaraes (Paco dos Duques de Braganca, Guimaraes Castle, &more). There's much more to do: snap pictures at Ponte de Dom Luis I, take in the architecture and atmosphere at Igreja da Ordem Terceira de São Francisco, look for gifts at Garrafeira do Carmo, and take in the spiritual surroundings of Porto Cathedral (Se Catedral).

For more things to do, photos, reviews, and tourist information, go to the Porto online visit planner.

San Juan, Puerto Rico to Porto is an approximately 14- hour flight. You can also do a combination of flight and train. The time zone difference moving from Atlantic Standard Time to Western European Time is 4 hours. Traveling from San Juan in October, expect nights in Porto to be cooler, around 15°C, while days are little chillier, around 26°C. Cap off your sightseeing on the 9th (Sun) early enough to go by car to Favaios.
more less

©
Your inner history buff will appreciate Santuario Nossa Senhora dos Remedios and Castelo de Ansiaes. Quinta do Bomfim and Quinta de Avessada are good opportunities to explore the local culture. Get out of town with these interesting Favaios side-trips: Quinta do Panascal (in Pinhao), Lamego (Quinta Santa Eufemia & Capela de S.Pedro de Balsemão) and Quinta do Popa (in Tabuaco).

You can drive from Porto to Favaios in 2 hours. Finish your sightseeing early on the 13th (Thu) to allow enough time to travel to Chaves.
more less

Things to do in Favaios

For traveler tips, where to stay, photos, and more tourist information, you can read our Chaves day trip app.

Getting from Favaios to Chaves by car takes about 1.5 hours. Wrap up your sightseeing on the 17th (Mon) early enough to travel back home.
more less

Things to do in Chaves