Start off your visit on the 15th (Wed): admire the striking features of Hakata Station, don't miss a visit to Fukuoka Tower, get lost in a book at Fukuoka City Public Library, then go for a walk through Ohori Park, and finally stroll around Maizuru Park. On your second day here, take in the spiritual surroundings of Kushida Shrine, explore the world behind art at Fukuoka Asian Art Museum, contemplate in the serene atmosphere at Komyozen-ji Temple, then contemplate in the serene atmosphere at Dazaifu Tenman-gu, and finally take in nature's colorful creations at Kasuga Park.

To see other places to visit, more things to do, where to stay, and tourist information, read Fukuoka trip itinerary maker.

Lisbon, Portugal to Fukuoka is an approximately 19-hour flight. The time zone difference moving from Western European Standard Time to Japan Standard Time is 9 hours. Traveling from Lisbon in March, things will get a bit cooler in Fukuoka: highs are around 17°C and lows about 7°C. On the 17th (Fri), wrap the sightseeing up by early afternoon so you can take a train to Kumamoto.
more less 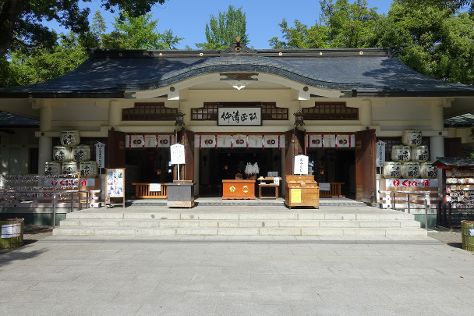 Centered around its castle, Kumamoto stands as a historic city with plenty of modern-day appeal to add to the mix.

Kick off your visit on the 17th (Fri): appreciate the extensive heritage of Kumamoto Castle and then take in the spiritual surroundings of Kato Shrine. Get ready for a full day of sightseeing on the next day: explore the wide array of goods at Tsuruya Department Store, make a trip to Kumamon Square, admire the masterpieces at Contemporary Art Museum, Kumamoto, buy something for everyone on your list at Shimotori Shotengai, then get all the information you need at Sakuranobaba Johsaien, and finally appreciate the extensive heritage of Kamitori Shopping Street.

Take a train from Fukuoka to Kumamoto in 1.5 hours. Alternatively, you can drive; or take a bus. In March in Kumamoto, expect temperatures between 17°C during the day and 6°C at night. Wrap up your sightseeing on the 19th (Sun) to allow time to take a train to Kagoshima.
more less

Things to do in Kumamoto

Sl Hitoyoshi
Highlights from your plan

On the 20th (Mon), make a trip to Sengan-en, don't miss a visit to Kagoshima Chuo Station, see the interesting displays at Museum of the Meiji Restoration, then take in panoramic vistas at Shiroyama Observatory, and finally appreciate the history behind Saigo Takamori Statue.

For maps, more things to do, reviews, and more tourist information, use the Kagoshima itinerary maker tool.

Traveling by train from Kumamoto to Kagoshima takes 2 hours. Alternatively, you can drive; or take a bus. Expect a daytime high around 17°C in March, and nighttime lows around 5°C. Cap off your sightseeing on the 21st (Tue) early enough to catch the train to Nagasaki.
more less

©
Museum of the Meiji Restoration

On the 21st (Tue), contemplate in the serene atmosphere at Urakami Cathedral, walk around Nagasaki Peace Park, wander the streets of Shinchi Chinatown, examine the collection at Dejima, then steep yourself in history at Glover Garden, and finally see the interesting displays at Nagasaki Museum of Traditional Performing Arts. Get ready for a full day of sightseeing on the next day: appreciate the history behind Hypocenter of Atomic Bombing, take an in-depth tour of Nagasaki Atomic Bomb Museum, see the interesting displays at Nagasaki Peace Memorial Hall for the Atomic Bomb Victims, then take your sightseeing to a higher altitude at Mt. Inasa, then get a sense of history and politics at Nagasaki Prefectural Government Observation Deck, and finally snap pictures at Megane Bridge.

For maps, more things to do, where to stay, and tourist information, refer to the Nagasaki online tour itinerary planner.

Take a train from Kagoshima to Nagasaki in 3.5 hours. Alternatively, you can do a combination of car and ferry; or take a bus. In March, daytime highs in Nagasaki are 17°C, while nighttime lows are 8°C. Wrap up your sightseeing on the 23rd (Thu) early enough to take a train to Hatsukaichi.
more less 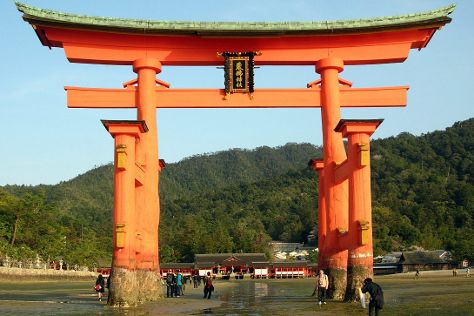 The city of Hatsukaichi developed from a small market town, frequented by passing samurais during the Edo period.

Take a train from Nagasaki to Hatsukaichi in 4 hours. Alternatively, you can drive; or do a combination of bus and train. In March, daily temperatures in Hatsukaichi can reach 16°C, while at night they dip to 6°C. Finish your sightseeing early on the 25th (Sat) so you can drive to Hiroshima.
more less

Things to do in Hatsukaichi

For other places to visit, reviews, where to stay, and other tourist information, go to the Hiroshima trip itinerary planner.

Hiroshima is very close to Hatsukaichi. In March in Hiroshima, expect temperatures between 16°C during the day and 6°C at night. On the 27th (Mon), you'll have the morning to explore before heading back home.
more less