Get out of town with these interesting Nice side-trips: Antibes (Le Sentier du Littoral, Cap d'Antibes & Musee Picasso), La Croisette (in Cannes) and Easy Dive (in Juan-les-Pins). Spend the 18th (Wed) exploring the fascinating underwater world at Marineland. There's still lots to do: take some stellar pictures from Colline du Chateau overlook, get to know the fascinating history of Saint-Paul de Vence, stop by Vieille Ville, and take in the architecture and atmosphere at Cathedrale Saint-Nicolas a Nice.

For traveler tips, more things to do, reviews, and other tourist information, use the Nice online trip planner.

Fort Lauderdale, USA to Nice is an approximately 14.5-hour flight. The time zone difference moving from Eastern Standard Time (EST) to Central European Standard Time (CET) is 6 hours. Expect slightly colder temperatures when traveling from Fort Lauderdale in August; daily highs in Nice reach 81°F and lows reach 71°F. Finish up your sightseeing early on the 21st (Sat) so you can go by car to Saint-Raphael.
more less 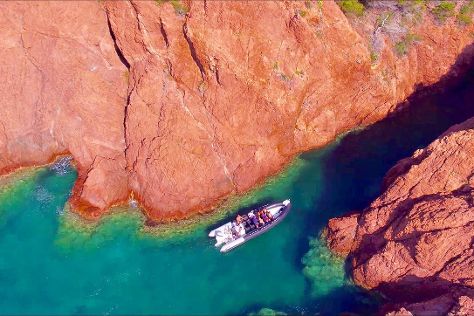 Explore Saint-Raphael's surroundings by going to Lac de Saint-Cassien (in Tanneron), La Chocolaterie du Rocher (in Roquebrune-sur-Argens) and Puget-sur-Argens (Waterworld lake of gaudrade & Prizoners Frejus). Next up on the itinerary: discover the deep blue sea with TakSea, appreciate the history behind Monument aux Morts, don't miss a visit to Massif de l'Esterel, and trek along Les Balcons du Cap Roux.

Plan my Saint-Raphael trip by asking Inpirock to come up with tips and suggestions.

Drive from Nice to Saint-Raphael in 1.5 hours. Alternatively, you can take a train; or do a combination of bus and train. Traveling from Nice in August, you will find days in Saint-Raphael are a bit warmer (90°F), and nights are slightly colder (62°F). Wrap up your sightseeing on the 24th (Tue) early enough to drive to Grimaud.
more less 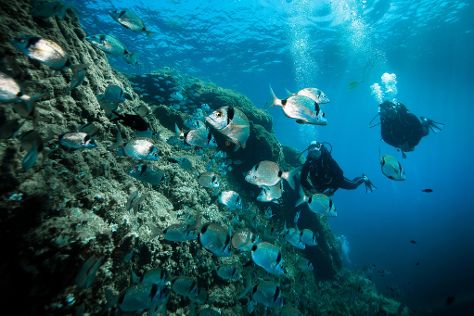 ©
Change things up with these side-trips from Grimaud: Dune La Londe (in La Londe Les Maures) and Aquavillage Parc (in Hyeres).

To find other places to visit, photos, traveler tips, and other tourist information, use the Grimaud online visit planner.

Getting from Saint-Raphael to Grimaud by car takes about 1.5 hours. Other options: do a combination of train and bus. In August, daily temperatures in Grimaud can reach 89°F, while at night they dip to 63°F. Finish your sightseeing early on the 27th (Fri) so you can drive to Cassis.
more less

Things to do in Grimaud

©
Cassis is a commune situated east of Marseille in the department of Bouches-du-Rhône in the Provence-Alpes-Côte d'Azur region in southern France.It is a popular tourist destination, famous for its cliffs (falaises) and the sheltered inlets called calanques. Get out of town with these interesting Cassis side-trips: Six-Fours-les-Plages (Ile du Gaou & Ile des Embiez). There's lots more to do: take in the dramatic natural features at Calanques, get outside with Calanque d'En-Vau, take a memorable drive along Route des Cretes, and take in the waterfront at Port de Cassis.

Traveling by car from Grimaud to Cassis takes 2 hours. Alternatively, you can do a combination of taxi and train. In August, plan for daily highs up to 86°F, and evening lows to 66°F. Wrap up your sightseeing by early afternoon on the 31st (Tue) to allow time for travel back home.
more less

Things to do in Cassis