©
Calvi is a commune in the Haute-Corse department of France on the island of Corsica.It is the seat of the Canton of Calvi, which contains Calvi and one other commune, Lumio. Explore the numerous day-trip ideas around Calvi: Galeria Marina (in Galeria), Phare de la Pietra (in Ile Rousse) and Eglise de la Sainte-Trinite et de Saint Jean-Baptiste (in Aregno). There's still lots to do: contemplate the long history of Citadelle de Calvi, delve into the distant past at Village abandonné d'Occi, see some colorful creatures with a scuba or snorkeling tour, and take a memorable tour with Tours.

For traveler tips, ratings, where to stay, and tourist information, read our Calvi trip planner.

©
Kick off your visit on the 22nd (Tue): get outside with D81, take in the dramatic natural features at Calanques de Piana, and then get interesting insight from Tours. Here are some ideas for day two: head outdoors with Plage de Ficajola, make a trip to Les Calanche Cliffs, look for all kinds of wild species at Nature Reserve of Scandola, then pause for some serene contemplation at Eglise de l'Assomption dite < Latine >, and finally cruise along Torra d'Omigna.

To find reviews, where to stay, and more tourist information, refer to the Piana tour itinerary planning tool.

Traveling by car from Calvi to Piana takes 2.5 hours. Alternatively, you can take a bus. In September, daytime highs in Piana are 30°C, while nighttime lows are 17°C. Finish your sightseeing early on the 23rd (Wed) to allow enough time to drive to Zonza.
more less

Things to do in Piana 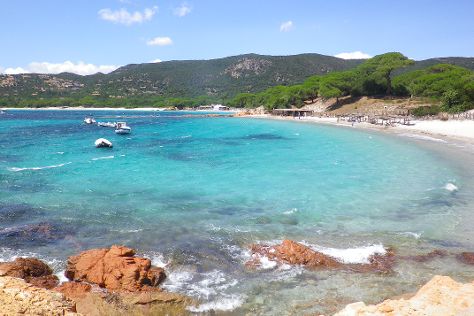 ©
Zonza is a commune in the Corse-du-Sud department of France on the island of Corsica.GeographyZonza is located in the mountain chain of Barocagio-Marghese which extends to the south of the Incudine massif. Explore Zonza's surroundings by going to Plage de Santa Giulia (in Santa Giulia), Gorges of the Solenzara River (in Sari-Solenzara) and Porto-Vecchio (plage de Tamaricciu, Plage de Palombaggia, &more). Next up on the itinerary: take in the awesome beauty at Aiguilles de Bavella (Bavella Needles), look for all kinds of wild species at Piscines Naturelles de Cavu, and delve into the lush surroundings at Foret de Vizzavona.

To find traveler tips, ratings, more things to do, and other tourist information, read our Zonza visit planner.

Traveling by car from Piana to Zonza takes 4.5 hours. Alternatively, you can do a combination of bus and taxi. In September, plan for daily highs up to 31°C, and evening lows to 18°C. Cap off your sightseeing on the 26th (Sat) early enough to go by car to Bonifacio.
more less

Things to do in Zonza

Porto-Vecchio, Gorges of the Solenzara River, Foret de Vizzavona
Highlights from your plan

Explore Bonifacio's surroundings by going to Tour Genoise De Capanella (in Serra-di-Ferro), Filitosa (in Sollacaro) and Boat Tours & Water Sports (in Propriano). There's much more to do: head off the coast to Iles Lavezzi, explore the fascinating underground world of Grottes de Bonifacio, tour the pleasant surroundings at Plage de Rondinara, and steep yourself in history at Bonifacio Citadel.

Drive from Zonza to Bonifacio in 1.5 hours. Alternatively, you can do a combination of taxi and bus. In September, daytime highs in Bonifacio are 32°C, while nighttime lows are 17°C. Finish your sightseeing early on the 2nd (Fri) to allow enough time to travel back home.
more less