Get in touch with nature at Mount Lycabettus and Voula Beach. Discover out-of-the-way places like Ancient Agora of Athens and Limni Vouliagmeni. Venture out of the city with trips to Byzantine Museum of Argos (in Argos), Moni Osiou Patapiou (in Loutraki) and Corinth (Submersible Bridges & Corinth Canal). There's much more to do: contemplate in the serene atmosphere at Temple of Hephaestus, take a stroll through Anafiotika, take an in-depth tour of Archaeological Museum of Nauplion, and steep yourself in history at Acropolis of Athens.

To find photos, other places to visit, maps, and more tourist information, refer to the Athens trip itinerary planning app. 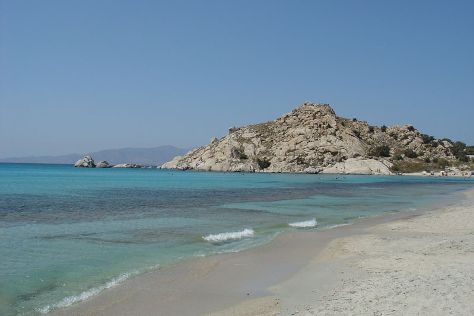 Explore hidden gems such as Old Town and Agios Prokopios Beach. Attractions like Plaka Beach and Amitis Beach make great kid-friendly stops. Take a break from Naxos Town with a short trip to Agios Akepsimas in Mikri Vigla, about 30 minutes away. There's still lots to do: kick back and relax at Mikri Vigla Beach, cool off at Aqua Fun Water Park, examine the collection at Theatrical Museum Iakovos Kampanellis, and look for gifts at Ta Axotica Gift Shop.

For other places to visit, photos, maps, and more tourist information, you can read our Naxos Town driving holiday planner.

Traveling by combination of subway and flight from Athens to Naxos Town takes 2.5 hours. Alternatively, you can ride a ferry. When traveling from Athens in August, plan for a bit cooler days in Naxos Town, with highs around 85°F, while nights are about the same with lows around 74°F. Wrap up your sightseeing on the 18th (Wed) to allow time to travel to Delphi.
more less

Start off your visit on the 19th (Thu): pause for some serene contemplation at Agios Nikolaos Church, get engrossed in the history at Delphi Archaeological Museum, and then delve into the distant past at Delphi. Get ready for a full day of sightseeing on the next day: kick back and relax at Sergoulas Beach and then contemplate the long history of Temple of Apollo In Delphi.

For ratings, more things to do, other places to visit, and other tourist information, you can read our Delphi itinerary builder app.

Sergoulas Beach
Highlights from your plan