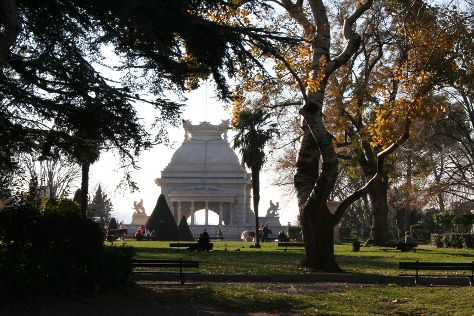 Get a sense of the local culture at Palais Longchamp and Centre de la Vieille Charite. Step off the beaten path and head to Vallon des Auffes and Eglise St-Trophime. You'll find plenty of places to visit near Marseille: Arles (St-Trophime Cloister (Cloitre St-Trophime), Abbaye de Montmajour, &more). Next up on the itinerary: see some colorful creatures with a scuba or snorkeling tour, contemplate in the serene atmosphere at Abbaye Saint Victor, and take in nature's colorful creations at Palais du Pharo.

To see traveler tips, other places to visit, where to stay, and other tourist information, refer to the Marseille itinerary maker.

Portland, USA to Marseille is an approximately 16-hour flight. Due to the time zone difference, you'll lose 9 hours traveling from Portland to Marseille. September in Marseille sees daily highs of 79°F and lows of 60°F at night. Wrap up your sightseeing on the 10th (Thu) early enough to drive to Saint-Tropez.
more less

Arles
Highlights from your plan

©
Saint-Tropez is a town, 100km west of Nice, in the Var department of the Provence-Alpes-Côte d'Azur region of southeastern France. You'll enjoy a bit of beach vacationing at Plage d'Aiguebelle and Plage des Canebiers. You'll explore the less-touristy side of things at Citadelle de Saint-Tropez - Musee d'histoire maritime and Plage de Saint-Clair. Get out of town with these interesting Saint-Tropez side-trips: Chapelle Sainte Roseline (in Les Arcs sur Argens), Gorges de Pennafort (in Callas) and Rhone American Cemetery and Memorial (in Draguignan). Next up on the itinerary: kick back and relax at Plage de Jean Blanc, head outdoors with L'Arnaude Aventures, pause for some serene contemplation at Paroisse de Ramatuelle, and stroll through La Ponche Beach.

To see more things to do, where to stay, and tourist information, read Saint-Tropez trip planner.

Getting from Marseille to Saint-Tropez by car takes about 2 hours. Other options: do a combination of train and bus; or take a bus. In September in Saint-Tropez, expect temperatures between 81°F during the day and 57°F at night. Wrap up your sightseeing on the 13th (Sun) to allow time to drive to Cannes.
more less

Things to do in Saint-Tropez

Although its luxury shops, nightlife, casinos, and high-end restaurants give Cannes a feeling of exclusivity, this classic French Riviera city has alternatives to suit every budget.

Get some cultural insight at La Croisette and Le Suquet. Step off the beaten path and head to Chateau de la Napoule / Musee Henry-Clews and Clock Tower of Notre-Dame de l'Esperance. Next up on the itinerary: take a stroll through Rue d'Antibes, take in the spiritual surroundings of Eglise Reformee de France, get a new perspective on things with Boat Tours & Water Sports, and make a trip to Le Monastere Fortifie.

Traveling by car from Saint-Tropez to Cannes takes 1.5 hours. Alternatively, you can take a train. In September in Cannes, expect temperatures between 79°F during the day and 60°F at night. Finish your sightseeing early on the 16th (Wed) so you can drive to Nice.
more less

Things to do in Cannes

Visit Vieille Ville and Cemetery of the Old Chateau for their historical value. Step out of the city life by going to Scuba & Snorkeling and Promenade du Paillon. You'll find plenty of places to visit near Nice: Menton (Promenade du Soleil & Basilica St. Michel) and Promenade Le Corbusier (in Roquebrune-Cap-Martin). Next up on the itinerary: wander the streets of Place Rossetti, contemplate in the serene atmosphere at Basilique Notre-Dame de Nice, pause for some serene contemplation at Cathedrale Saint-Nicolas a Nice, and take some stellar pictures from Colline du Chateau overlook.

To see ratings, reviews, maps, and tourist information, you can read our Nice trip itinerary maker.

Getting from Cannes to Nice by car takes about an hour. Other options: take a train; or take a bus. In September, plan for daily highs up to 76°F, and evening lows to 65°F. Finish your sightseeing early on the 19th (Sat) so you can travel back home.
more less

©
Cemetery of the Old Chateau