For ratings, other places to visit, photos, and more tourist information, use the Marbella online sightseeing planner .

Copenhagen, Denmark to Marbella is an approximately 7-hour flight. You can also do a combination of train and flight; or drive. Traveling from Copenhagen in December, things will get a bit warmer in Marbella: highs are around 20°C and lows about 10°C. Finish your sightseeing early on the 21st (Sat) to allow enough time to drive to Nerja.
more less

Malaga
Highlights from your plan

©
Nerja is a municipality on the Costa del Sol in the province of Málaga in the autonomous community of Andalusia in southern Spain. Kick off your visit on the 22nd (Sun): enjoy the sand and surf at Capistrano Playa, then stroll through Burriana Beach, then explore the fascinating underground world of Fundación Cueva de Nerja, and finally take in the dramatic natural features at Cliffs of Maro Cerro Gordo. On the 23rd (Mon), you'll have a packed day of sightseeing: enjoy the sand and surf at Playa El Salon, make a trip to Balcon de Europa, and then look for all kinds of wild species at Nerja Donkey Sanctuary.

You can drive from Marbella to Nerja in 1.5 hours. Other options are to take a bus; or do a combination of train and bus. Traveling from Marbella in December, expect Nerja to be little chillier, temps between 14°C and 1°C. Finish up your sightseeing early on the 23rd (Mon) so you can go by car to Alhambra.
more less

©
Kick off your visit on the 24th (Tue): make a trip to Justice Gate and then identify plant and animal life at Area Recreativa Rio Dilar.

Find out how to plan Alhambra trip without stress by asking Inspirock to help create an itinerary.

Getting from Nerja to Alhambra by car takes about 1.5 hours. Expect a daytime high around 14°C in December, and nighttime lows around 1°C. Cap off your sightseeing on the 24th (Tue) early enough to travel to Ronda.
more less

Things to do in Alhambra

Kick off your visit on the 25th (Wed): look for all kinds of wild species at Reservatauro Ronda, take in the views from Puente Nuevo, then take in breathtaking views at El Tajo de Ronda, and finally take some stellar pictures from Mirador de Aldehuela. On the 26th (Thu), you'll have a packed day of sightseeing: get outside with Ronda Dressage, then learn about winemaking at Dona Felisa Winery, then take some stellar pictures from Mirador Paseo Blas Infante, and finally ride a horse along Paddock Paradise Ronda.

For where to stay, reviews, maps, and tourist information, read our Ronda route builder website .

You can drive from Alhambra to Ronda in 2.5 hours. Plan for a bit warmer temperatures traveling from Alhambra in December, with highs in Ronda at 19°C and lows at 7°C. Finish up your sightseeing early on the 26th (Thu) so you can catcht the bus to Seville.
more less

Start off your visit on the 27th (Fri): take in the architecture and atmosphere at Catedral de Sevilla, then take in panoramic vistas at Torre Giralda, then appreciate the extensive heritage of Barrio Santa Cruz, and finally make a trip to Plaza de España. Keep things going the next day: admire the natural beauty at Parque de Maria Luisa, then contemplate the long history of Royal Tobacco Factory, then steep yourself in history at Royal Alcázar of Seville, and finally make a trip to Metropol Parasol.

Make your Seville itinerary with Inspirock to find out what to see and where to go.

You can take a bus from Ronda to Seville in 2 hours. Alternatively, you can drive; or take a train. December in Seville sees daily highs of 19°C and lows of 8°C at night. Wrap up your sightseeing on the 28th (Sat) to allow time to travel to St. George's.
more less 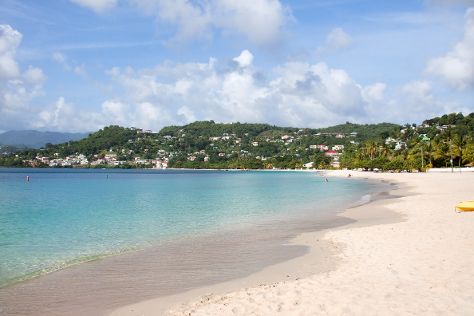 The capital of the Island of Spice, St.

Kids will appreciate attractions like Grand Anse Beach and Magazine Beach. There's much more to do: stroll through La Sagesse Nature Center, contemplate the waterfront views at Carenage, admire the sheer force of Annandale Falls, and make a trip to Market Square.

Things to do in St. George's