To see maps, reviews, where to stay, and more tourist information, you can read our Toulouse trip planner .

Montreal, Canada to Toulouse is an approximately 11-hour flight. You can also do a combination of flight and train; or do a combination of train and flight. Due to the time zone difference, you'll lose 6 hours traveling from Montreal to Toulouse. Traveling from Montreal in October, expect Toulouse to be somewhat warmer, temps between 24°C and 13°C. Wrap up your sightseeing on the 24th (Wed) to allow time to take a train to Bordeaux.
more less

Start off your visit on the 25th (Thu): steep yourself in history at La ville d'Hiver and then identify plant and animal life at Réserve Ornithologique du Teich. On the 26th (Fri), you'll have a packed day of sightseeing: don't miss a visit to Citadelle de Blaye, then explore the fascinating underground world of Eglise monolithe Saint-Jean, and then learn about winemaking at Chateau Cantenac.

Take a train from Toulouse to Bordeaux in 2.5 hours. Alternatively, you can drive; or take a bus. In October in Bordeaux, expect temperatures between 23°C during the day and 13°C at night. Wrap up your sightseeing by early afternoon on the 27th (Sat) to allow time for travel to Roanne.
more less

©
Start off your visit on the 28th (Sun): see the interesting displays at Musee Departemental Breton, enjoy the sand and surf at Plage du Ris, and then pause for some serene contemplation at Eglise de Saint Ronan.

To see maps, ratings, reviews, and tourist information, you can read our Quimper trip planning tool .

You can drive from Bordeaux to Quimper in 6 hours. Other options are to do a combination of flight and bus; or do a combination of flight and train. Traveling from Bordeaux in October, you will find days in Quimper are a bit cooler (19°C), and nights are about the same (11°C). Wrap up your sightseeing on the 29th (Mon) early enough to take a train to Paris.
more less

Things to do in Quimper

Start off your visit on the 29th (Mon): stroll through Ile Saint-Louis, then take a stroll through Île de la Cité, and then admire the landmark architecture of Louvre Museum.

Traveling by train from Quimper to Paris takes 4 hours. Alternatively, you can do a combination of bus and flight; or drive. In October, daytime highs in Paris are 19°C, while nighttime lows are 10°C. Wrap up your sightseeing on the 30th (Tue) early enough to travel to Roanne.
more less

©
Roanne is a commune in the Loire department in central France.It is located 90km northwest of Lyon on the Loire River. Start off your visit on the 30th (Tue): pause for some serene contemplation at Eglise Saint-Etienne, contemplate the long history of Le Bourg Medieval de Villerest, and then contemplate the waterfront views at Lac de Villerest.

To see maps, more things to do, photos, and more tourist information, use the Roanne visit planning site .

You can drive from Paris to Roanne in 4.5 hours. Alternatively, you can fly. October in Roanne sees daily highs of 20°C and lows of 10°C at night. Finish your sightseeing early on the 31st (Wed) to allow enough time to travel to Paris.
more less

Things to do in Roanne

Villerest
Highlights from your plan 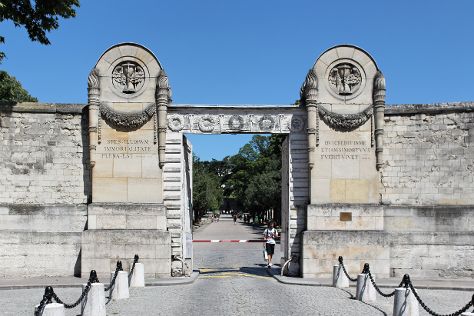 Start off your visit on the 31st (Wed): stroll the grounds of Pere-Lachaise Cemetery (Cimetiere du Pere-Lachaise) and then contemplate the waterfront views at Seine River. Keep things going the next day: take in nature's colorful creations at Palace of Versailles.

You can drive from Roanne to Paris in 4.5 hours. Another option is to fly. You'll have a few hours on the 2nd (Fri) to wrap things up before traveling home.
more less