For other places to visit, ratings, more things to do, and more tourist information, refer to the Selcuk tour app.

Ankara to Selcuk is an approximately 5-hour flight. You can also drive; or take a bus. Traveling from Ankara in July, you will find days in Selcuk are somewhat warmer (41°C), and nights are little chillier (25°C). You will have some time to spend on the 12th (Sun) before leaving for Bodrum City.
more less 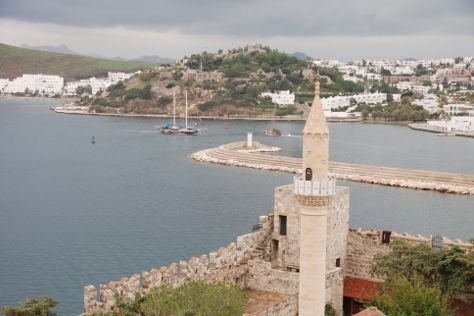 Bodrum City is known for historic sites, museums, and beaches. Your plan includes some of its best attractions: explore the historical opulence of Castle of St. Peter, examine the collection at Mausoleum of Halicarnassus, delve into the distant past at Bodrum Amphitheater, and take in the waterfront activity at Yalikavak Marina.

Drive from Selcuk to Bodrum City in 2.5 hours. Alternatively, you can take a bus; or do a combination of train and bus. In July in Bodrum City, expect temperatures between 41°C during the day and 28°C at night. Finish your sightseeing early on the 14th (Tue) to allow enough time to drive to Kas.
more less

Yalikavak Marina
Highlights from your plan

On the 15th (Wed), kick back and relax at Kaputas Beach, then kick back and relax at Big Pebble Beach, and then get outside with Outdoor Activities. On the 16th (Thu), you'll have a packed day of sightseeing: enjoy the sand and surf at Patara Plajı, then enjoy the sand and surf at Kaputas Beach, then cool off at Hidayet koyu, and finally don't miss a visit to Lions Tomb.

You can drive from Bodrum City to Kas in 5 hours. Alternatively, you can take a bus; or ride a ferry. Expect little chillier temperatures when traveling from Bodrum City in July; daily highs in Kas reach 38°C and lows reach 24°C. Wrap up your sightseeing on the 16th (Thu) early enough to drive to Fethiye.
more less

Get out of town with these interesting Fethiye side-trips: Babadag (in Oludeniz), Marmaris Beach (in Marmaris) and Icmeler Beach (in Icmeler). The adventure continues: push the limits with an extreme tour, walk around Oludeniz, explore the fascinating underground world of Mavi Magara, and indulge in some personalized pampering at some of the best spas.

To see photos, ratings, more things to do, and other tourist information, you can read our Fethiye online vacation planner.

Getting from Kas to Fethiye by car takes about 2 hours. Other options: take a bus. In July in Fethiye, expect temperatures between 38°C during the day and 24°C at night. Finish your sightseeing early on the 21st (Tue) so you can travel back home.
more less