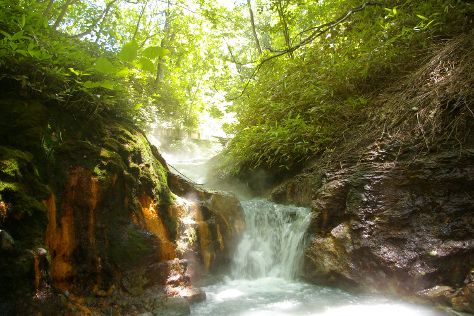 Your day-by-day itinerary now includes Susukino Tennen Onsen Tokakyo. Popular historic sites such as The Site of Temiya Line and Hokkaido Shrine Tongu are in your itinerary. Get some cultural insight at Historical Village of Hokkaido (Kaitaku-no Mura) and Otaru-shi General Museum. Explore Sapporo's surroundings by going to Campana Rokkatei (in Furano), Oyunumagawa Natural Footbath (in Noboribetsu) and Otaru (Ransima Beach, Sumiyoshi Shrine, &more). Next up on the itinerary: sample the tasty concoctions at Asahi Breweries Hokkaido Brewery, pause for some serene contemplation at Sapporo St. Michael's Church, contemplate the long history of Former Ishikiriyama Station, and indulge in some personalized pampering at some of the best spas.

If you are flying in from Australia, the closest major aiports are New Chitose Airport, Asahikawa Airport and Hakodate Airport. In October, plan for daily highs up to °C, and evening lows to °C. Wrap up your sightseeing on the 1st (Fri) early enough to drive to Kitahiroshima.
more less

©
The Site of Temiya Line

For reviews, ratings, more things to do, and more tourist information, go to the Kitahiroshima day trip planning site.

Traveling by car from Sapporo to Kitahiroshima takes an hour. Expect slightly colder evenings in Kitahiroshima when traveling from Sapporo in November, with lows around °C. Wrap up your sightseeing by early afternoon on the 3rd (Sun) to allow time for the car ride back home.
more less

Things to do in Kitahiroshima