Museum-lovers will get to explore Musée Marc Chagall and Palais Lascaris. Get some historical perspective at Vieille Ville and Cathedrale Saint-Nicolas a Nice. Venture out of the city with trips to Centre d'Art du Verre PIERINI (in Biot), La Croisette (in Cannes) and Saint-Paul de Vence (in St-Paul-de-Vence). There's lots more to do: admire the masterpieces at La Maison du Portal, pause for some serene contemplation at Eglise Saint Jean Baptiste, examine the collection at Musee Matisse, and make a trip to Eglise.

For photos, where to stay, traveler tips, and tourist information, you can read our Nice trip itinerary tool.

Philadelphia, USA to Nice is an approximately 14- hour combination of train and flight. You can also do a combination of train and flight; or fly. You'll lose 6 hours traveling from Philadelphia to Nice due to the time zone difference. Traveling from Philadelphia in December, expect Nice to be somewhat warmer, temps between 58°F and 45°F. Wrap up your sightseeing on the 10th (Mon) early enough to drive to Entrevaux.
more less

©
Entrevaux is a commune (municipality), former episcopal seat (not bishopric in title, that remained the Diocese of Glandèves) and Latin Catholic titular see in the Alpes-de-Haute-Provence department in southeastern France.GeographySet on both sides of the narrow road between Annot and Puget-Théniers that runs alongside the gorge of the river Var, the medieval walled town lies in the shadow of a mountaintop citadel.HistoryFollowing incursions of Saracens and the razing of the old town of Glandèves, which became a bishopric no later then the sixth century, the more defensible site of medieval Entrevaux was founded in the 11th century on the rocky spur in an angle of the river; the oldest recorded name is Interrivos and dates from 1040.Between 1481 and 1487, Provence became a part of France.In 1536, Entrevaux fell to the troops of Charles V, Holy Roman Emperor, betrayed by its lord Jacques Glandeves; half the population was massacred (coll.). Kick off your visit on the 11th (Tue): take in the architecture and atmosphere at Eglise Saint-Bathélémy, shop like a local with Atelier de Jiel, then take in the architecture and atmosphere at Cathedrale Notre Dame de l'Assomption d`Entrevaux, then contemplate the long history of La Citadelle d'Entrevaux, and finally examine the collection at Musee de la Moto d'Entrevaux. Get ready for a full day of sightseeing on the 12th (Wed): take an in-depth tour of Ecomusee de la Roudoule, pause for some serene contemplation at Presbytère, then steep yourself in history at Colmars-les-Alpes, and finally see the interesting displays at Maison Musee Colmars.

Drive from Nice to Entrevaux in 1.5 hours. In December in Entrevaux, expect temperatures between 57°F during the day and 43°F at night. Finish up your sightseeing early on the 12th (Wed) so you can travel to Avignon.
more less

Things to do in Entrevaux 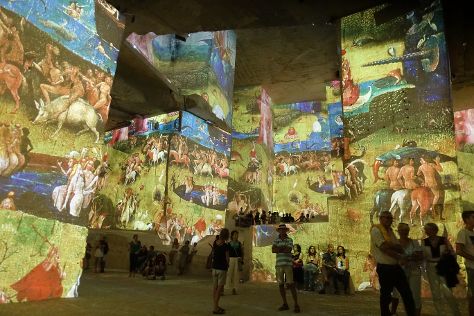 On the 13th (Thu), steep yourself in history at Palais du Roure, examine the collection at Musee Angladon, explore the historical opulence of Palais des Papes, then take in the views from Pont d'Avignon, and finally admire the masterpieces at Musee du Petit Palais. Get ready for a full day of sightseeing on the next day: examine the collection at Musee Frederic Mistral, explore the world behind art at Carrieres des Lumieres, then admire the masterpieces at Musee Departemental Arles Antique, and finally get engrossed in the history at Musee Calvet.

You can drive from Entrevaux to Avignon in 3.5 hours. Plan for slightly colder temperatures traveling from Entrevaux in December, with highs in Avignon at 50°F and lows at 35°F. Finish your sightseeing early on the 14th (Fri) to allow enough time to take a train to Marseille.
more less

On the 15th (Sat), examine the collection at Site Memorial du Camp des Milles, examine the collection at Musee Granet, and then get engrossed in the history at Paul Cezanne’s Studio. Get ready for a full day of sightseeing on the next day: contemplate in the serene atmosphere at Cathédrale La Major, contemplate in the serene atmosphere at Abbaye Saint Victor, then take in the spiritual surroundings of Basilique Notre-Dame de la Garde, and finally don't miss a visit to Museum of European and Mediterranean Civilisations.

To find other places to visit, photos, traveler tips, and other tourist information, read our Marseille sightseeing planner.

You can take a train from Avignon to Marseille in an hour. Alternatively, you can drive; or take a bus. When traveling from Avignon in December, plan for somewhat warmer days and about the same nights in Marseille: temperatures range from 56°F by day to 40°F at night. Wrap up your sightseeing on the 16th (Sun) to allow time to travel back home.
more less

Aix-en-Provence
Highlights from your plan