Get outdoors at Nara Park and Chausuyama. Discover out-of-the-way places like Kasuga Grand Shrine and Kongobu-ji Temple. Change things up with these side-trips from Osaka: Nara (Nigatsu-do Temple & Nara National Museum) and Koya-cho (Jokiin, Koyasan Danjo Garan, &more). There's still lots to do: ponder the world of politics at Mint Museum, take a stroll through Dotombori District, admire the landmark architecture of Tsutenkaku, and step into the grandiose world of Osaka Castle.

To see other places to visit, traveler tips, photos, and other tourist information, read our Osaka sightseeing tool.

Helsinki, Finland to Osaka is an approximately 14.5-hour flight. Due to the time zone difference, you'll lose 7 hours traveling from Helsinki to Osaka. Traveling from Helsinki in April, expect nights in Osaka to be somewhat warmer, around 12°C, while days are much hotter, around 23°C. Wrap up your sightseeing on the 16th (Fri) to allow time to take a train to Kyoto.
more less

Koya-cho, Nara
Highlights from your plan 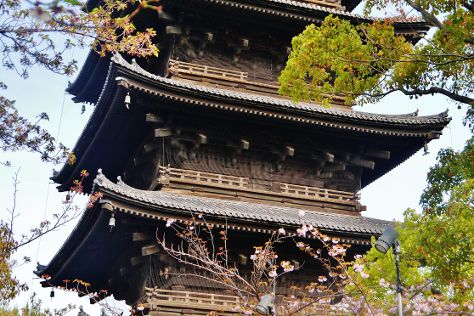 You'll explore the less-touristy side of things at Toji and Kennin-ji Temple. Your inner history buff will appreciate Heian Shrine and Sagano. The adventure continues: take in the spiritual surroundings of Chion-in Temple, take in nature's colorful creations at Kyoto Botanical Garden, savor the flavors at Food & Drink, and take a stroll through Pontocho District.

For traveler tips, photos, where to stay, and tourist information, go to the Kyoto trip site.

You can take a train from Osaka to Kyoto in 1.5 hours. Other options are to drive; or take a bus. In April in Kyoto, expect temperatures between 22°C during the day and 11°C at night. Wrap up your sightseeing on the 19th (Mon) to allow time to travel to Tokyo.
more less

Eschew the tourist crowds and head to Tokyo National Museum and Asakusa Shrine. Museum-lovers will appreciate Fire Museum and Mitsubishi Ichigokan Museum. There's much more to do: contemplate in the serene atmosphere at Zojo-ji Temple, steep yourself in history at Nezu Shrine, take a stroll through Yanaka District, and visit Ueno District.

Getting from Kyoto to Tokyo by train takes about 3.5 hours. Other options: fly; or drive. In April, daytime highs in Tokyo are 22°C, while nighttime lows are 12°C. Wrap up your sightseeing on the 23rd (Fri) to allow time to travel back home.
more less