Escape the urban bustle at Altyn-Emel and Almatinskiy Terrenkur. Get some historical perspective at St. Nicholas Cathedral and Baiken Mosque. Step out of Almaty with an excursion to Turgen Waterfalls in Turgen--about 1h 5 min away. There's still lots to do: take some stellar pictures from Kok-Tobe Hill, admire the masterpieces at A. Kasteyev Museum of Fine Arts, pause for some serene contemplation at Ascension Cathedral, and make a trip to Iversky Seraphimovskiy Nunnery.

To see where to stay, maps, reviews, and other tourist information, you can read our Almaty itinerary site.

Abu Dhabi, United Arab Emirates to Almaty is an approximately 10.5-hour flight. Due to the time zone difference, you'll lose 2 hours traveling from Abu Dhabi to Almaty. In May, Almaty is colder than Abu Dhabi - with highs of °C and lows of °C. Wrap up your sightseeing on the 23rd (Sat) early enough to drive to Saty.
more less

Turgen Waterfalls
Highlights from your plan

©
Kick off your visit on the 24th (Sun): contemplate the waterfront views at Kolsai Lake and then explore the activities along Lake Kaindy.

To find reviews, traveler tips, where to stay, and other tourist information, read our Saty trip itinerary planning app.

Traveling by car from Almaty to Saty takes 4.5 hours. Alternatively, you can take a train. On the 24th (Sun), wrap the sightseeing up by early afternoon so you can travel to Karaganda.
more less

Satisfy your inner culture vulture at Cathedral of the Blessed Virgin Mary of Fatima and Church of Peter and Pavel. Eschew the tourist crowds and head to Karaganda Regional Museum and Temple of the Icon of Our Lady Skoroposlushnitsa. There's still lots to do: examine the collection at KarLag / Museum of Political Repression Victims’ Memory of the Dolinka Settlement, identify plant and animal life at Saryarka - Steppe and Lakes of Northern Kazakhstan, pause for some serene contemplation at Church of the Intercession, and don't miss a visit to Independence Stele.

Traveling by flight from Saty to Karaganda takes 7.5 hours. Alternatively, you can drive; or do a combination of car, bus, and train. In May, daytime highs in Karaganda are °C, while nighttime lows are °C. Finish your sightseeing early on the 27th (Wed) to allow enough time to drive to Nur-Sultan.
more less

Karagandy, Bektau-Ata Mountain Area, Temple of the Icon of Our Lady Skoroposlushnitsa
Highlights from your plan 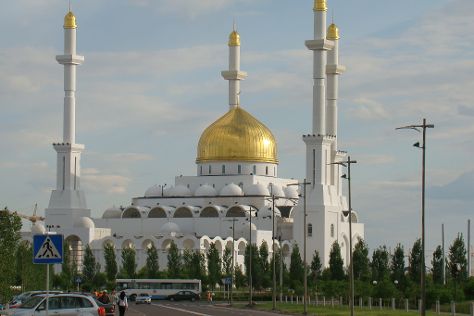 Get outdoors at Bauyrzhan Momyshuly Park and Arai. You'll explore the less-touristy side of things at Nur-Astana Mosque and Saken Seifullin Museum. Change things up with a short trip to Alzhir, Memorial Museum of Victims of Political Repressions and Totalitarianism in Malinovka (about 46 minutes away). There's still lots to do: take in the spiritual surroundings of Hazret Sultan Mosque, appreciate the history behind Monument to the Soldiers of World War II, learn about all things military at Kazakhstan Military History Museum, and explore the world behind art at National Museum of Kazakhstan.

To see reviews, ratings, more things to do, and tourist information, you can read our Nur-Sultan day trip planning site.

Drive from Karaganda to Nur-Sultan in 3 hours. Alternatively, you can take a train; or take a bus. Traveling from Karaganda in May, Nur-Sultan is somewhat warmer at night with lows of °C. Cap off your sightseeing on the 30th (Sat) early enough to travel back home.
more less

Alzhir, Memorial Museum of Victims of Political Repressions and Totalitarianism
Highlights from your plan