©
Orgnac-l'Aven is a commune in the Ardèche department in southern France.The Aven d'Orgnac cave is located near the village. Kids will appreciate attractions like Grand Site de l'Aven d'Orgnac and Escale Aventure. Change things up with these side-trips from Orgnac-l'Aven: Eglise Saint-Pierre (in Labeaume), Saint-Remeze (La Miellerie J.D Granade, Domaine Lavandais - Musee de la Lavande, &more) and Bois de Paiolive (in Les Vans). There's lots more to do: take in breathtaking views at Gorges de l'Ardeche, scramble along the landscape with a canyoning and rapelling tour, get a new perspective on things with Boat Tours & Water Sports, and Head underground at Grotte de Saint Marcel.

Things to do in Orgnac-l'Aven 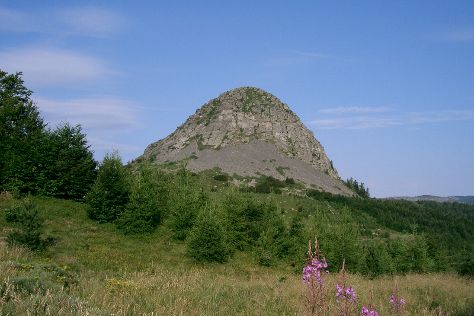 ©
Aubenas is a commune in the southern part of the Ardèche department in the Rhône Valley in southern France.It is the seat of several government offices. Family-friendly places like Cimes et Canyons and Natural History Museum of The Ardeche will thrill your kids. Step out of Aubenas with an excursion to Mont Gerbier de Jonc in Saint-Martial--about 58 minutes away. Next up on the itinerary: take in breathtaking views at Base Canyon de la Besorgues, take in the views from Pont du Diable, view the masterpieces at La Maison des Artisans, and step into the grandiose world of Chateau de Vogue.

To see more things to do, photos, and more tourist information, go to the Aubenas trip planner.

Getting from Orgnac-l'Aven to Aubenas by car takes about an hour. In June, daily temperatures in Aubenas can reach 33°C, while at night they dip to 19°C. Wrap up your sightseeing on the 17th (Mon) to allow time to travel to Boucieu-le-Roi.
more less

Things to do in Aubenas

©
Natural History Museum of The Ardeche

©
Start off your visit on the 18th (Tue): take an in-depth tour of Musee de l'alambic - Distillerie Jean Gauthier, get to know the fascinating history of Historic Center of Tournon sur Rhone, then explore the historical opulence of Château-Musée de Tournon-sur-Rhône, then contemplate in the serene atmosphere at Collegiale Saint Julien, and finally stroll around Le Jardin d'Eden. On the 19th (Wed), you'll have a packed day of sightseeing: find something for the whole family at Aquarock Aventure and then engage your brain at Musee des papeteries Canson et Montgolfier.

You can drive from Aubenas to Boucieu-le-Roi in 2 hours. In June, Boucieu-le-Roi is little chillier than Aubenas - with highs of 28°C and lows of 15°C. Wrap up your sightseeing by early afternoon on the 20th (Thu) to allow enough time to travel back home.
more less

Things to do in Boucieu-le-Roi