The capital of Vietnam, Hanoi has bounded back from the effects of war, and today serves as a bustling commercial and cultural hub bursting at the seams.

Start off your visit on the 10th (Wed): explore the striking landscape at Nung Hill, thentake an in-depth tour of Vietnam Museum of Ethnology, thenstop by The Craft House Cathedral - Souvenir & Gift Shop, and finally get outside with Outdoor Activities. On the 11th (Thu), you'll have a packed day of sightseeing: see the interesting displays at Vietnamese Women's Museum, paddle through the water with a kayaking and canoeing tour, and then appreciate the history behind Statue of King Le Thai To.

For where to stay, traveler tips, photos, and other tourist information, refer to the Hanoi online driving holiday planner.

The Route module shows you travel options from your home to Hanoi. Wrap up your sightseeing on the 11th (Thu) early enough to take a bus to Halong Bay.
more less

Things to do in Hanoi

Halong Bay encompasses a cluster of verdant limestone islets that jut out from the sea and make up an enchanting setting recognized as a World Heritage Site.

On the 12th (Fri), head off the coast to Hon Ga Choi Island and then add some adventure to your tour with a kayaking and canoeing tour.

Things to do in Halong Bay

Indisputably one of Vietnam's most atmospheric destinations, Hoi An contains a World Heritage-listed old town boasting over 2,000 years of culture and history.

You'll explore the less-touristy side of things at Nature & Wildlife Tours and Food Tours. Explore Hoi An's surroundings by going to Da Nang (Museum of Sa Huynh & Champa Culture, Lady Buddha, &more). There's much more to do: stop by Yaly Couture, take in the exciting artwork at Precious Heritage by Rehahn, and test the waters at a local thermal spa.

For ratings, maps, reviews, and more tourist information, use the Hoi An travel planner.

Getting from Halong Bay to Hoi An by flight takes about 6 hours. Other options: do a combination of bus, train, and taxi; or take a bus. Expect a daytime high around 41°C in June, and nighttime lows around 30°C. Cap off your sightseeing on the 15th (Mon) early enough to travel to Nha Trang.
more less

Things to do in Hoi An

On a vacation in Nha Trang, a famous Vietnam resort town, you can lounge on a beach all day and party into the night.

On the 16th (Tue), pause for some serene contemplation at Nha Tho Nui, thentake in the natural beauty of Hot mineral springs I-Resort Nha Trang, and then stroll through Nha Trang Beach.

To see traveler tips, maps, where to stay, and other tourist information, read our Nha Trang driving holiday planning app.

You can fly from Hoi An to Nha Trang in 4.5 hours. Alternatively, you can drive; or take a train. Finish up your sightseeing early on the 16th (Tue) so you can catch the bus to Da Lat.
more less

Things to do in Nha Trang 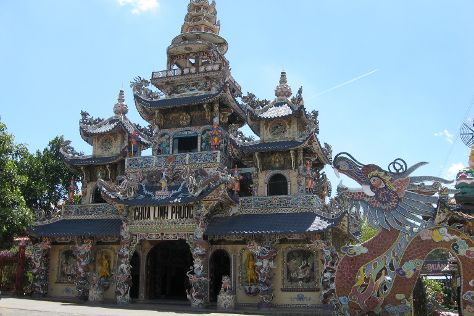 City of a Thousand Flowers

Start off your visit on the 17th (Wed): take in the spiritual surroundings of Thien Vien Truc Lam, thentake in the spiritual surroundings of Linh Phuoc Pagoda, and then explore and take pictures at DL Nature's. On the 18th (Thu), you'll have a packed day of sightseeing: get great views at Lam Vien Square, get the adrenaline pumping with an extreme tour, and then explore the activities along Xuan Huong Lake.

Traveling by bus from Nha Trang to Da Lat takes 3 hours. Alternatively, you can drive. Wrap up your sightseeing on the 18th (Thu) early enough to travel to Hue.
more less

Things to do in Da Lat

Nestled on the banks of the Perfume River, the city of Hue remains most famous as the former home of the Nguyen Dynasty, the influence of which remains evident in local palaces, temples, forts, and museums.

On the 19th (Fri), steep yourself in history at Imperial Tomb of Dong Khanh, steep yourself in history at Tomb of Minh Mang, and then delve into the distant past at Royal Tombs. Get ready for a full day of sightseeing on the 20th (Sat): contemplate the long history of Tomb of Tu Duc, thenadmire the striking features of Thien Mu Pagoda, and then get a dose of the wild on a nature and wildlife tour.

To find out how to plan a trip to Hue, use our trip itinerary maker.

Traveling by flight from Da Lat to Hue takes 3.5 hours. Alternatively, you can drive; or do a combination of bus and train. In June, daily temperatures in Hue can reach 41°C, while at night they dip to 29°C. Finish your sightseeing early on the 20th (Sat) to allow enough time to travel back home.
more less

Things to do in Hue