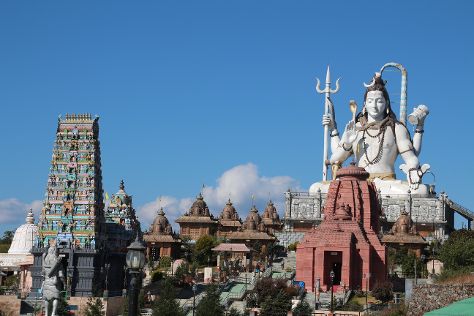 ©
Namchi or Namtse is the district headquarters of the South Sikkim district in the Indian state of Sikkim. On the 21st (Thu), take in the spiritual surroundings of Char Dham, then pause for some photo ops at Siddheswar Dham, then take in the awesome beauty at Samdruptse Hill, and finally admire the landmark architecture of Ngadak Monastery. On the 22nd (Fri), you'll have a packed day of sightseeing: identify plant and animal life at Maenam Wildlife Sanctuary and then take your sightseeing to a higher altitude at Tendong Hill.

To see traveler tips, maps, other places to visit, and tourist information, refer to the Namchi trip planner .

Dhaka City, Bangladesh to Namchi is an approximately 15-hour car ride. In March in Namchi, expect temperatures between 35°C during the day and 19°C at night. Cap off your sightseeing on the 22nd (Fri) early enough to travel to Pelling.
more less

Things to do in Namchi

Samdruptse Hill
Highlights from your plan

The small hill station of Pelling draws visitors with its impressive nature and abundance of hotels and resorts.

Satisfy your inner culture vulture at Ralong Monastery and Pemayangtse Monastery. Deepen your sense of the past at sights like Dubdi Monastery and Tashiding Monastery. Explore the numerous day-trip ideas around Pelling: Red Panda Tours and Travels (in Yuksom) and Maenam Hill (in Ravangla). There's still lots to do: admire the striking features of Sangacholing Monastery.

For where to stay, photos, maps, and tourist information, read Pelling tour planner .

Traveling by car from Namchi to Pelling takes 3 hours. In March, plan for daily highs up to 35°C, and evening lows to 19°C. Cap off your sightseeing on the 25th (Mon) early enough to go by car to Gangtok.
more less

Things to do in Pelling

Get some cultural insight at Phensong Monastery and Rhenock Gumpa, Monastery. Popular historic sites such as Shiv Mandir and Ranka Monastery are in your itinerary. The adventure continues: gain insight with a tour of cultural highlights, identify plant and animal life at Shingba Rhododendron Sanctuary, don't miss a visit to Gonjang Monastery, and take a stroll through MG Marg.

To find traveler tips, reviews, where to stay, and other tourist information, read our Gangtok sightseeing planner .

Traveling by car from Pelling to Gangtok takes 2 hours. Wrap up your sightseeing on the 30th (Sat) to allow time to travel back home.
more less

Things to do in Gangtok