On your holiday to Porto Alegre, affectionately nicknamed "Smile City," you can expect a warm welcome from locals.

Shop till you drop at Fundacao Ibere Camargo and Galeria Hipotetica. Visit Parque Aldeia do Imigrante and Metropolitan Cathedral for their historical value. There's much more to do: see the interesting displays at Casa de Cultura Mário Quintana, make a trip to Enigma Escape Game, walk around Parque Moinhos de Vento, and pause for some serene contemplation at Santuario Nossa Senhora Madre de Deus.

Santa Maria to Porto Alegre is an approximately 4-hour car ride. In October, daily temperatures in Porto Alegre can reach 28°C, while at night they dip to 18°C. Finish up your sightseeing early on the 20th (Sun) so you can travel to Lima.
more less

Things to do in Porto Alegre

Parque Aldeia do Imigrante
Highlights from your plan 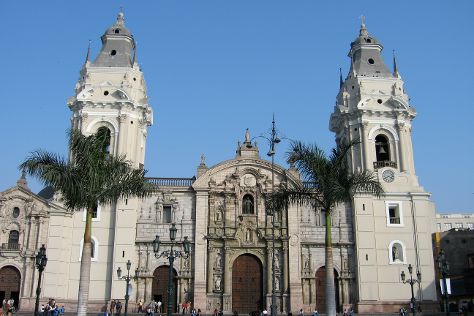 City of the Kings

Founded in 1535 by Spanish explorer Francisco Pizarro, Lima represents an interesting blend of modern attractions and preserved colonial architecture, much of it clustered in the World Heritage-listed city center.

On the 21st (Mon), pause for some serene contemplation at Cathedral of Lima, then wander the streets of Centro Historico de Lima, then take in the spiritual surroundings of Basilica y Monasterio de Santo Domingo, and finally wander the streets of San Isidro. Here are some ideas for day two: delve into the distant past at Site Museum and Archaeological Sanctuary of Pachacamac and then admire the masterpieces at MALI - Museo de Arte de Lima.

To see maps, ratings, more things to do, and tourist information, refer to the Lima trip itinerary maker tool .

Things to do in Lima

Explore hidden gems such as Q'enqo and Spas. Give yourself a bit of retail therapy at Mercado Central de San Pedro and Andean Magic Art Jewelry. Explore Cusco's surroundings by going to San Pedro Apostol de Andahuaylillas (in Andahuaylillas) and Piquillacta (in Huarcapay). Next up on the itinerary: explore the ancient world of Tipon, contemplate the long history of Plaza de Armas, pause for some serene contemplation at Capilla San Antonio Abad, and take in the spiritual surroundings of Iglesia de la Compania de Jesus.

To find photos, more things to do, ratings, and tourist information, refer to the Cusco online travel planner .

You can fly from Lima to Cusco in 2 hours. Other options are to drive; or take a bus. Plan for little chillier nights when traveling from Lima in October since evenings lows in Cusco dip to 7°C. Cap off your sightseeing on the 25th (Fri) early enough to travel to Machu Picchu.
more less

Things to do in Cusco

A symbol of the Incan civilization, the abandoned city of Machu Picchu represents a must-see on a Peru vacation.

Kick off your visit on the 26th (Sat): explore the ancient world of Santuario Historico de Machu Picchu and then admire the natural beauty at Los Jardines de Mandor. Here are some ideas for day two: admire nature's wide array of creatures at Mariposario de Machupicchu, then explore the ancient world of Winay Wayna, and then get great views at Intipuncu.

To find photos, traveler tips, more things to do, and other tourist information, read our Machu Picchu online trip maker .

You can do a combination of bus and train from Cusco to Machu Picchu in 3.5 hours. Other options are to take a train; or drive. Finish your sightseeing early on the 27th (Sun) to allow enough time to travel back home.
more less

Things to do in Machu Picchu