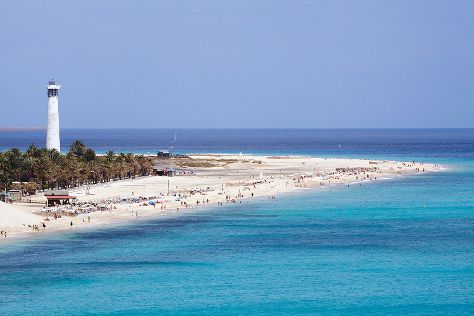 For more things to do, photos, maps, and tourist information, refer to the Morro del Jable trip itinerary builder tool.

Things to do in Morro del Jable

Surrounded by a series of white sand dunes, Corralejo is tiny enough to explore on foot or bicycle.

Corralejo is known for wildlife, nightlife, and adventure. Your plan includes some of its best attractions: identify plant and animal life at Parque Natural de Corralejo, enjoy the sand and surf at El Cotillo Beach & Lagoons, get impressive views of Humankind Healing Massage, and make a splash at Acua Water Park.

To see more things to do, ratings, maps, and other tourist information, you can read our Corralejo trip itinerary app.

You can drive from Morro del Jable to Corralejo in 2 hours. Another option is to take a bus. Expect a daytime high around 28°C in November, and nighttime lows around 22°C. Finish up your sightseeing early on the 25th (Wed) so you can travel back home.
more less

Things to do in Corralejo