Your list of things to see and do now includes Autoworld, Royal Palace of Brussels, Royal Museum of the Armed Forces and of Military History, and other attractions. On the 8th (Mon), contemplate the long history of Royal Palace of Brussels, admire the landmark architecture of Parc du Cinquantenaire, examine the collection at Autoworld, brush up on your military savvy at Royal Museum of the Armed Forces and of Military History, thenexamine the collection at Museum of Cocoa and Chocolate (Musee du Cacao et du Chocolat), and finally admire the striking features of Hôtel de Ville de Bruxelles. Get ready for a full day of sightseeing on the 9th (Tue): see the interesting displays at Musical Instruments Museum (MIM), thenadmire the masterpieces at Musées Royaux des Beaux-Arts de Belgique, and then make a trip to Belgian Comic Strip Center.

Manchester, UK to Brussels is an approximately 4.5-hour flight. You can also take a train; or do a combination of car and train. The time zone changes from Greenwich Mean Time to Central European Standard Time, which is usually a 1 hour difference. In April in Brussels, expect temperatures between °C during the day and °C at night. Wrap up your sightseeing on the 10th (Wed) to allow time to take a train to Paris.
more less

On the 10th (Wed), admire the striking features of Arc de Triomphe and then admire the masterpieces at Louvre Museum. Get ready for a full day of sightseeing on the next day: explore the world behind art at Musee d'Orsay, thensteep yourself in history at Eiffel Tower, and then pause for some serene contemplation at Basilique du Sacre-Coeur de Montmartre.

To find maps, other places to visit, and other tourist information, read Paris sightseeing planner.

Getting from Brussels to Paris by train takes about 2.5 hours. Other options: drive; or fly. April in Paris sees daily highs of °C and lows of °C at night. Wrap up your sightseeing on the 12th (Fri) to allow time to take a train to Luxembourg City.
more less 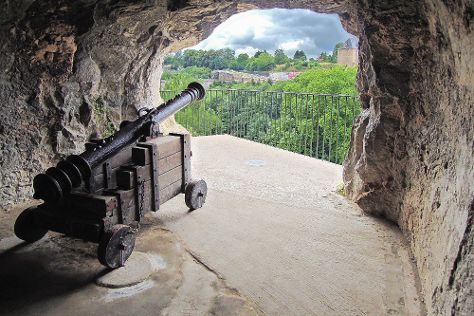 Traveling by train from Paris to Luxembourg City takes 3 hours. Alternatively, you can drive; or fly. In April, daytime highs in Luxembourg City are °C, while nighttime lows are °C. Cap off your sightseeing on the 13th (Sat) early enough to go by car to Frankfurt.
more less 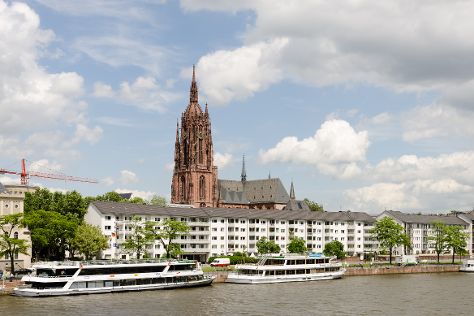 A global center of finance and transportation, Frankfurt is perhaps best known for its futuristic cityscape.

Your day-by-day itinerary now includes Romer as well as Main Tower. Kick off your visit on the 14th (Sun): make a trip to Romer, take some stellar pictures from Main Tower, and then explore the world behind art at Stadel Museum. Get ready for a full day of sightseeing on the next day: steep yourself in history at Goethe House, admire the natural beauty at Palmengarten, thentake in the views from Iron Bridge, thentake in the spiritual surroundings of Old Nicholas Church (Alte Nikolaikirche), and finally take in the spiritual surroundings of Cathedral of St. Bartholomew (Dom St. Bartholomaus).

You can drive from Luxembourg City to Frankfurt in 3 hours. Other options are to fly; or take a bus. In April, plan for daily highs up to °C, and evening lows to °C. Finish up your sightseeing early on the 16th (Tue) so you can travel to Amsterdam.
more less

Things to do in Frankfurt

On the 16th (Tue), admire the masterpieces at Rijksmuseum, explore the world behind art at Van Gogh Museum, and then walk around Vondelpark. On the 17th (Wed), you'll have a packed day of sightseeing: take a stroll through Red Light District, thencontemplate the long history of Museum Het Rembrandthuis (Rembrandt House), thenindulge your thirst for a good beer at Heineken Experience, and finally take an in-depth tour of Anne Frank House.

Plan my trip to Amsterdam with suggested itineraries provided by Inspirock.

Traveling by combination of train and flight from Frankfurt to Amsterdam takes 4 hours. Alternatively, you can drive; or fly. April in Amsterdam sees daily highs of °C and lows of °C at night. On the 18th (Thu), you're off to Eindhoven.
more less

The capital of Dutch industrial design, Eindhoven is known as the "City of Light." This is thanks to the technology company, Phillips, which has its base here and hosts many light projects in buildings around the city.

You've now added Philips Museum to your itinerary. Start off your visit on the 18th (Thu): examine the collection at Philips Museum.

To see maps, traveler tips, other places to visit, and other tourist information, use the Eindhoven road trip planning app.

Traveling by car from Amsterdam to Eindhoven takes 1.5 hours. Alternatively, you can take a train; or take a bus. In April, daytime highs in Eindhoven are °C, while nighttime lows are °C. Wrap up your sightseeing by early afternoon on the 18th (Thu) to allow enough time to travel back home.
more less

Things to do in Eindhoven