©
Tagliacozzo is a town and comune in the province of L'Aquila, Abruzzo, central Italy.HistoryTagliacozzo lies in an area inhabited in early historic times by the Aequi and the Marsi, although the first mentions of the town dates from the 11th century AD. Kick off your visit on the 26th (Wed): explore the activities along Lago San Benedetto, thenpause for some serene contemplation at Monastero di Santa Scolastica, and then contemplate in the serene atmosphere at Monastero Di S.Benedetto. Get ready for a full day of sightseeing on the next day: take your sightseeing to a higher altitude at Monte Livata, thentake in the architecture and atmosphere at Chiesa di Santa Maria in Valle Porclaneta, and then contemplate the long history of Municipio Tagliacozzo.

To find reviews, more things to do, maps, and other tourist information, refer to the Tagliacozzo trip itinerary planner.

Rome to Tagliacozzo is an approximately 1.5-hour car ride. December in Tagliacozzo sees daily highs of °C and lows of °C at night. Wrap up your sightseeing on the 28th (Fri) early enough to travel to Pianella.
more less

Things to do in Tagliacozzo

To see ratings, other places to visit, photos, and tourist information, refer to the Pianella travel itinerary planner.

Traveling by car from Tagliacozzo to Pianella takes 1.5 hours. December in Pianella sees daily highs of °C and lows of °C at night. Finish your sightseeing early on the 30th (Sun) so you can travel to L'Aquila.
more less

Things to do in Pianella 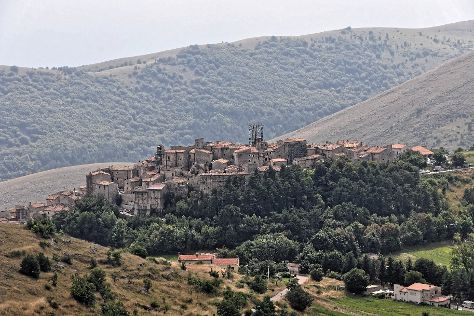 To see more things to do, ratings, other places to visit, and more tourist information, go to the L'Aquila travel planning site.

Getting from Pianella to L'Aquila by car takes about 2 hours. In December in L'Aquila, expect temperatures between °C during the day and °C at night. Finish your sightseeing early on the 2nd (Wed) so you can drive to Celano.
more less

Things to do in L'Aquila

©
Celano is a town and comune in the Province of L'Aquila, central Italy, 120km east of Rome by rail.GeographyCelano rises on the top of a hill in the territory of Marsica, below the mountain range of Sirente. Get some historical perspective at Santuario dell'Addolorata di Castelpetroso and Castello Piccolomini di Celano. La Casa degli Appennini and Anfiteatro di Marruvium are good opportunities to explore the local culture. Change things up with these side-trips from Celano: La Camosciara (in Civitella Alfedena), Lago di Barrea (in Barrea) and Il Lago di Scanno (in Scanno).

To see reviews, maps, and other tourist information, read our Celano itinerary planner.

Traveling by car from L'Aquila to Celano takes an hour. In January, daytime highs in Celano are °C, while nighttime lows are °C. You'll set off for home on the 5th (Sat).
more less

Things to do in Celano