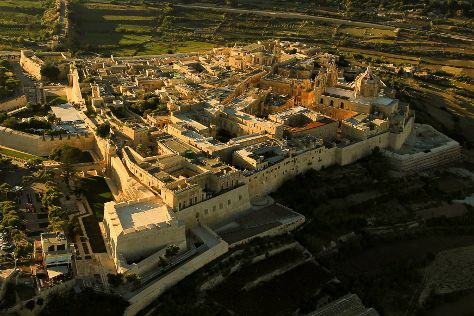 The city of Mdina has long been called the "Silent City of Malta" due to the fortified walls that confine this medieval town.

Get out of town with these interesting Mdina side-trips: Ggantija Megalithic Temples (in Ggantija), Citadel (in Victoria) and Ta' Pinu National Shrine (in Gharb). There's still lots to do: get to know the fascinating history of Mdina Old City, take in nature's colorful creations at Upper Barrakka Gardens, stroll through Mellieha Beach, and learn about all things military at Fort St Elmo - National War Museum.

To see maps, ratings, photos, and other tourist information, use the Mdina trip planning site.

Melbourne, Australia to Mdina is an approximately 26- hour combination of flight and bus. You can also do a combination of train, flight, and bus. The time zone changes from Australian Eastern Standard Time to Central European Standard Time, which is usually a -9 hour difference. Traveling from Melbourne in November, expect a bit warmer with lows of 17°C in Mdina. You'll have a few hours on the 9th (Sat) to wrap things up before traveling home.
more less

Things to do in Mdina