Muscat, Oman to Nur-Sultan is an approximately 11-hour flight. The time zone changes from Gulf Standard Time (GST) to East Kazakhstan Time (ALMT), which is usually a 2 hour difference. When traveling from Muscat in August, plan for little chillier days and much colder nights in Nur-Sultan: temperatures range from °C by day to °C at night. Wrap up your sightseeing on the 7th (Fri) early enough to drive to Karaganda.
more less

Karaganda is known for museums, historic sites, and nightlife. Your plan includes some of its best attractions: explore the stunning scenery at Qarqaraly National Park, pause for some photo ops at Statue of Abai Kunanbayev, take your sightseeing to a higher altitude at Bektau-Ata Mountain Area, and take in the architecture and atmosphere at Cathedral of the Blessed Virgin Mary of Fatima.

To see ratings, maps, where to stay, and other tourist information, go to the Karaganda trip maker.

You can drive from Nur-Sultan to Karaganda in 3 hours. Alternatively, you can take a train; or take a bus. Traveling from Nur-Sultan in August, expect a bit cooler with lows of °C in Karaganda. Finish up your sightseeing early on the 10th (Mon) so you can travel to Saty.
more less 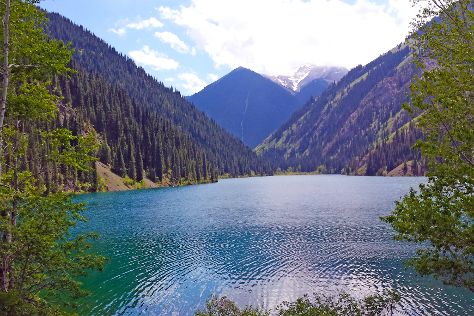 For reviews, where to stay, maps, and more tourist information, refer to the Saty holiday planning tool.

Getting from Karaganda to Saty by flight takes about 7.5 hours. Other options: drive; or do a combination of train, car, and bus. Cap off your sightseeing on the 11th (Tue) early enough to go by car to Almaty.
more less

Almaty is known for parks, historic sites, and nature. Your plan includes some of its best attractions: get great views at Kok-Tobe Hill, find something for the whole family at Almaty Central Park, appreciate the history behind Glory Memorial, and hit the slopes at Shymbulak Ski Resort.

To find maps, reviews, more things to do, and more tourist information, go to the Almaty day trip planning app.

You can drive from Saty to Almaty in 4.5 hours. Another option is to take a train. In August, plan for daily highs up to °C, and evening lows to °C. Wrap up your sightseeing on the 14th (Fri) to allow time to travel back home.
more less