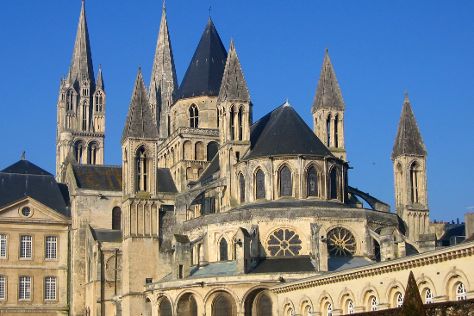 Kick off your visit on the 21st (Wed): take in the spiritual surroundings of Abbaye aux Hommes, pause for some serene contemplation at Eglise Saint-Pierre, brush up on your military savvy at Musee de la Batterie de Merville, then stroll the grounds of Cimetiere Militaire Allemand de La Cambe, then stroll the grounds of Beny-sur-Mer Canadian War Cemetery, and finally explore the world behind art at Musee Baron Gerard. On the next day, enjoy the sand and surf at Plage de Trouville, then take in the architecture and atmosphere at Notre Dame de Grace, and then take an in-depth tour of Omaha Beach Memorial Museum.

To see traveler tips, ratings, where to stay, and other tourist information, you can read our Bayeux trip itinerary app.

On the 24th (Sat), step into the grandiose world of Chateau de Montal, take in the dramatic scenery at La Cascade d'Autoire, then admire the masterpieces at Chateau des Doyens, and finally admire nature's wide array of creatures at Reptiland.

Before you visit Rocamadour, use our trip planner to discover what you can do and see there.

You can drive from Bayeux to Rocamadour in 7 hours. Alternatively, you can do a combination of train, bus, and flight; or do a combination of flight and train. Traveling from Bayeux in August, you will find days in Rocamadour are somewhat warmer (82°F), and nights are about the same (57°F). Wrap up your sightseeing by early afternoon on the 25th (Sun) to allow enough time to travel to Porto-Vecchio.
more less

©
Porto-Vecchio is a commune in the Corse-du-Sud department of France on the island of Corsica. Kick off your visit on the 26th (Mon): see some colorful creatures with a scuba or snorkeling tour, enjoy the sand and surf at Plage de Palombaggia, and then get some thrills out on the water with a waterskiing or jet-skiing adventure.

To see ratings, reviews, photos, and other tourist information, use the Porto-Vecchio road trip app.

You can fly from Rocamadour to Porto-Vecchio in 9 hours. Alternatively, you can do a combination of car and ferry; or do a combination of train, bus, ferry, and car. Traveling from Rocamadour in August, things will get a bit warmer in Porto-Vecchio: highs are around 88°F and lows about 66°F. Finish your sightseeing early on the 26th (Mon) so you can travel to Annecy.
more less

Things to do in Porto-Vecchio

Getting from Porto-Vecchio to Annecy by flight takes about 5.5 hours. Other options: do a combination of car, ferry, and train; or do a combination of bus and ferry. Traveling from Porto-Vecchio in August, things will get little chillier in Annecy: highs are around 77°F and lows about 57°F. Wrap up your sightseeing on the 29th (Thu) to allow time to travel to Amsterdam.
more less

Start off your visit on the 29th (Thu): wander the streets of Amsterdam Canal Ring, see the interesting displays at Rembrandt Molen van Sloten - Amsterdam / Kuiperijmuseum, and then contemplate the waterfront views at Ronde Hoep Polder.

Do a combination of bus and flight from Annecy to Amsterdam in 6 hours. Alternatively, you can take a train; or drive. When traveling from Annecy in August, plan for little chillier days and about the same nights in Amsterdam: temperatures range from 72°F by day to 56°F at night. Cap off your sightseeing on the 29th (Thu) early enough to travel back home.
more less