The capital of Lithuania, Vilnius, boasts an impressive medieval quarter--one of the continent's largest and a World Heritage Site with almost 2,000 historical buildings.

Start off your visit on the 4th (Wed): contemplate in the serene atmosphere at Cathedral (Arkikatedra Bazilika), pause for some serene contemplation at St. Anne's Church, and then take an in-depth tour of Gediminas Castle Tower.

For ratings, maps, more things to do, and other tourist information, go to the Vilnius road trip planning app.

If you are flying in from Poland, the closest major aiports are Vilnius International Airport and Kaunas International Airport. In September in Vilnius, expect temperatures between 20°C during the day and 9°C at night. Finish up your sightseeing early on the 4th (Wed) so you can go by car to Minsk.
more less

Things to do in Vilnius 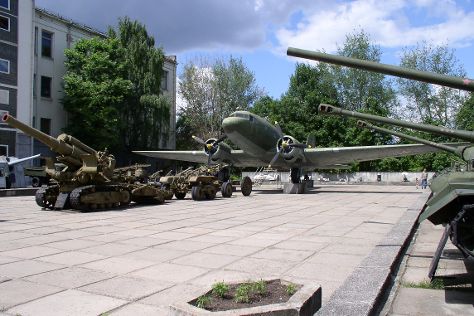 On the 5th (Thu), make a trip to Victory Square, browse the collection at National Library of Belarus, pause for some photo ops at Island of Tears, then learn about all things military at Belarusian State Museum of the History of the Great Patriotic War, then pause for some serene contemplation at Church of Saints Simon and Helena, and finally take in the spiritual surroundings of Archangel Mikhail.

To see ratings, maps, reviews, and other tourist information, you can read our Minsk holiday maker app.

Traveling by car from Vilnius to Minsk takes 2.5 hours. Alternatively, you can take a train; or do a combination of flight and bus. Traveling from Vilnius to Minsk, you'll lose 1 hour due to the time zone difference. September in Minsk sees daily highs of 20°C and lows of 10°C at night. Cap off your sightseeing on the 5th (Thu) early enough to travel to Kiev.
more less

Start off your visit on the 6th (Fri): hit the best photo ops around with an inspiring photography tour, then steep yourself in history at Kyivo-Pechers'ka Lavra, then see the interesting displays at Mykola Syadristy Microminiatures Museum, and finally admire the landmark architecture of St. Sophia's Cathedral.

To see photos, traveler tips, and other tourist information, go to the Kiev route planner.

Traveling by combination of bus and flight from Minsk to Kiev takes 3.5 hours. Alternatively, you can do a combination of bus and flight; or drive. You'll gain 1 hour traveling from Minsk to Kiev due to the time zone difference. In September, plan for daily highs up to 24°C, and evening lows to 12°C. Finish your sightseeing early on the 6th (Fri) so you can travel to Chisinau.
more less

Things to do in Kiev

©
Chișinău Etymology and namesThe origin of the city's name is unclear, but in one version, the name comes from the archaic Romanian word chișla (meaning "spring", "source of water") and nouă ("new"), because it was built around a small spring, at the corner of Pușkin and Albișoara streets.The other version, formulated by Ștefan Ciobanu, Romanian historian and academician, holds that the name was formed the same way as the name of Chișineu (alternative spelling: Chișinău) in Western Romania, near the border with Hungary. Start off your visit on the 7th (Sat): admire the striking features of Triumphal Arch, then stroll around Stefan cel Mare Park, then contemplate the long history of Stephen the Great Monument, and finally do a tasting at Cricova Winery.

To find other places to visit, more things to do, where to stay, and other tourist information, read Chisinau trip planner.

Traveling by combination of bus and flight from Kiev to Chisinau takes 5 hours. Alternatively, you can drive; or do a combination of flight and train. Wrap up your sightseeing on the 7th (Sat) early enough to take a bus to Brasov.
more less

With the dramatic Carpathian Mountains as backdrop, Brasov is the largest city in a region of mountain resorts.

Kick off your visit on the 8th (Sun): have some family-friendly fun at Season Hill, get your game on at Quad Team Building, and then take your sightseeing to a higher altitude at Mount Tampa.

To see ratings, traveler tips, and tourist information, you can read our Brasov online journey planner.

Take a bus from Chisinau to Brasov in 7 hours. Alternatively, you can drive; or take a train. Cap off your sightseeing on the 8th (Sun) early enough to catch the train to Bucharest.
more less

Things to do in Brasov

Poiana Brasov
Highlights from your plan 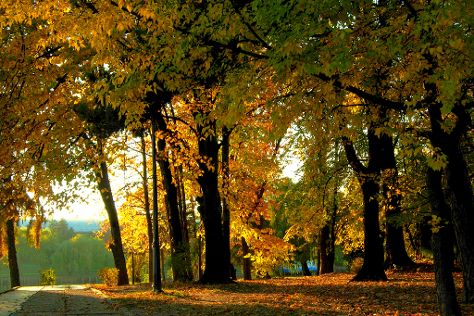 Start off your visit on the 9th (Mon): ponder the world of politics at Palace of Parliament, then steep yourself in history at Stavropoleos Monastery, then admire the striking features of Muzeul National al Satului "Dimitrie Gusti", and finally walk around Herăstrău Park.

You can take a train from Brasov to Bucharest in 2.5 hours. Other options are to drive; or take a bus. In September, daytime highs in Bucharest are 30°C, while nighttime lows are 13°C. Wrap up your sightseeing on the 9th (Mon) early enough to travel to Sofia.
more less 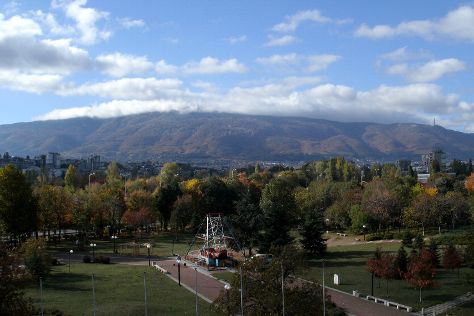 On the 10th (Tue), take your sightseeing to a higher altitude at Vitosha Mountain, test your problem-solving skills at popular escape rooms, and then take in the architecture and atmosphere at St. Alexander Nevski Cathedral.

To see more things to do, where to stay, reviews, and tourist information, read our Sofia trip planner.

Traveling by flight from Bucharest to Sofia takes 5 hours. Alternatively, you can drive; or take a bus. In September, daily temperatures in Sofia can reach 28°C, while at night they dip to 13°C. Wrap up your sightseeing on the 10th (Tue) to allow time to drive to Skopje.
more less

Kick off your visit on the 11th (Wed): take in the views from The Stone Bridge, appreciate the extensive heritage of Macedonia Square, and then explore the activities along Lake Matka.

For reviews, maps, traveler tips, and other tourist information, go to the Skopje trip planner.

Traveling by car from Sofia to Skopje takes 3.5 hours. Alternatively, you can take a bus. You'll gain 1 hour traveling from Sofia to Skopje due to the time zone difference. September in Skopje sees daily highs of 30°C and lows of 14°C at night. Wrap up your sightseeing on the 11th (Wed) to allow time to travel to Athens.
more less

Kick off your visit on the 12th (Thu): stop by Plaka, explore the world behind art at Benaki Museum, and then get engrossed in the history at National Archaeological Museum. Get ready for a full day of sightseeing on the 13th (Fri): get engrossed in the history at Acropolis Museum, then explore the ancient world of Temple of Olympian Zeus, then make a trip to Plateia Syntagmatos, and finally explore the ancient world of Acropolis of Athens.

To see reviews, ratings, other places to visit, and tourist information, refer to the Athens itinerary planning tool.

Do a combination of flight and subway from Skopje to Athens in 2.5 hours. Alternatively, you can drive; or do a combination of bus and train. You'll lose 1 hour traveling from Skopje to Athens due to the time zone difference. Prepare for somewhat warmer weather when traveling from Skopje in September: high temperatures in Athens hover around 34°C and lows are around 24°C. Finish your sightseeing early on the 13th (Fri) so you can travel back home.
more less