Vienna is known for historic sites, museums, nightlife, parks, and zoos & aquariums. Your plan includes some of its best attractions: step into the grandiose world of Schonbrunn Palace, admire the landmark architecture of Otto Wagner Pavillon Karlsplatz, learn about wildlife with up-close encounters at Schönbrunn Zoo, and see the interesting displays at Kunsthistorisches Museum Wien.

Ankara, Turkey to Vienna is an approximately 6.5-hour combination of bus and flight. You can also drive; or take a bus. You'll gain 2 hours traveling from Ankara to Vienna due to the time zone difference. Traveling from Ankara in November, Vienna is slightly colder at night with lows of 3°C. Finish your sightseeing early on the 16th (Sat) so you can drive to Hallstatt.
more less 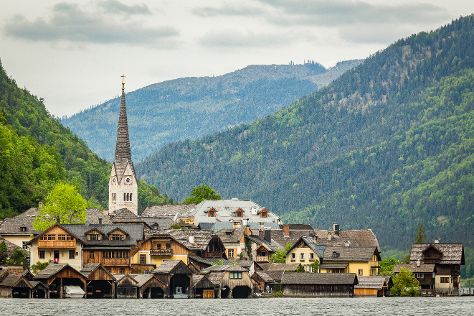 On the 17th (Sun), tour the pleasant surroundings at Obertraun Bathing Area/Lakeside Recreation Area, then kick back and relax at Badestrand Hallstatt, and then take in the architecture and atmosphere at Pfarre St. Wolfgang. Keep things going the next day: kick back and relax at Offentlicher Badeplatz Brauwiese, then pause for some serene contemplation at Parish of the Assumption, and then contemplate in the serene atmosphere at Hallstatt Lutheran Church.

Drive from Vienna to Hallstatt in 3.5 hours. Alternatively, you can take a train; or do a combination of flight and train. Wrap up your sightseeing on the 18th (Mon) to allow time to travel to Achenkirch.
more less

©
Parish of the Assumption

©
Kick off your visit on the 19th (Tue): head outdoors with Karwendel Bergbahn, stroll through Badestrand Achensee Nord, and then see the interesting displays at Vitalberg - Steinol Museum.

For more things to do, where to stay, photos, and other tourist information, use the Achenkirch trip planner .

Traveling by car from Hallstatt to Achenkirch takes 3.5 hours. In November, daytime highs in Achenkirch are 11°C, while nighttime lows are 0°C. Wrap up your sightseeing on the 19th (Tue) to allow time to travel to Salzburg.
more less

Things to do in Achenkirch

Pertisau
Highlights from your plan

On the 20th (Wed), step into the grandiose world of Schloss Hellbrunn, pause for some serene contemplation at Salzburg Cathedral, then admire the landmark architecture of Fortress Hohensalzburg, and finally admire the natural beauty at Mirabell Palace. Keep things going the next day: see the interesting displays at Salzburg Museum, browse the exhibits of Mozarts Geburtshaus, then look for gifts at Sporer Likör- & Punschmanufaktur, then make a trip to Linzergasse, and finally make a trip to Salzburger Altstadt.

To find out how to plan a trip to Salzburg, use our trip itinerary maker.

You can drive from Achenkirch to Salzburg in 2 hours. In November, plan for daily highs up to 10°C, and evening lows to 1°C. On the 22nd (Fri), wrap the sightseeing up by early afternoon so you can travel back home.
more less