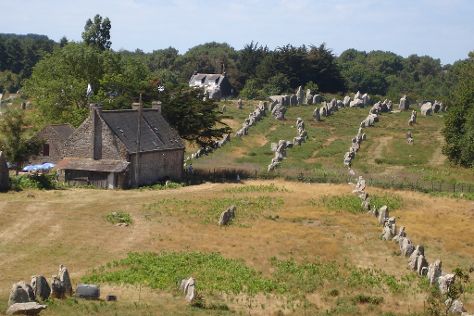 ©
Carnac is a commune beside the Gulf of Morbihan on the south coast of Brittany in the Morbihan department in north-western France.Its inhabitants are called Carnacois in French. Carnac stones has been added to your itinerary. On the 28th (Fri), take in the waterfront at Port De St Goustan, make a trip to Dolmens de Mane Karioned, then head outdoors with Cote Sauvage, then examine the collection at Maison des Megalithes, and finally delve into the distant past at Carnac stones.

To see reviews, where to stay, maps, and other tourist information, read our Carnac trip builder tool.

If you are flying in from United Kingdom, the closest major aiports are Rennes-Saint-Jacques Airport, Nantes Atlantique Airport and Dinard-Pleurtuit-Saint-Malo Airport. Expect a daytime high around 24°C in August, and nighttime lows around 14°C. Wrap up your sightseeing on the 28th (Fri) to allow time to travel back home.
more less

Things to do in Carnac